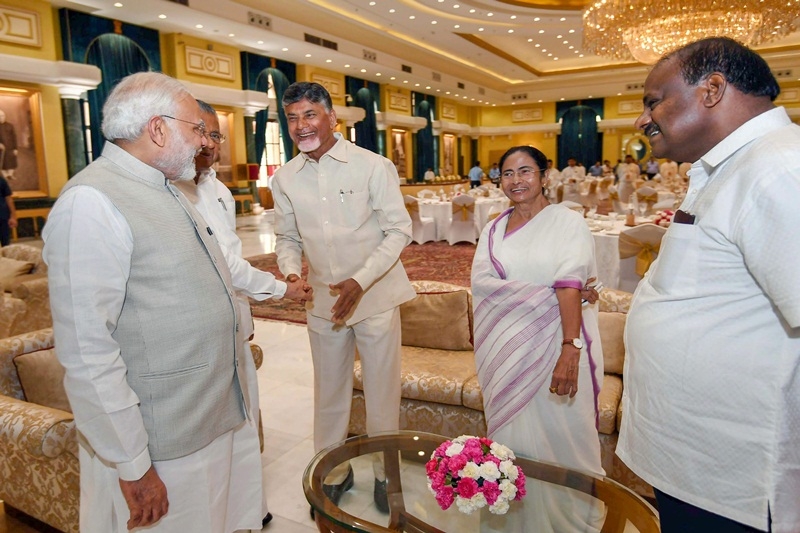 New Delhi: The much touted spirit of federation lay in tatters on Sunday. Even as Prime Minister Narendra Modi, at a key meeting of Niti Aayog, invoked the spirit of “Team India” and harped on ‘competitive federalism,’ four non-BJP chief ministers met the PM on the side lines of the meeting to seek immediate resolution of what they dubbed was a “constitutional crisis” in the national capital.

The reference was to Delhi Chief Minister Arvind Kejriwal’s sit-in protest at the house of Lieutenant Governor Anil Baijal for almost a week. The four chief ministers — Mamata Banerjee, N Chandrababu Naidu, Pinarayi Vijayan and HD Kumaraswamy – have accused the centre of stoking the crisis and “destroying” the federal structure. “If this is happening in the Capital, then what will happen in the other states?” Mamata Banerjee said on Saturday.

Kejriwal, who is squatting in the waiting room at the Delhi Lt Governor’s house with three of his ministers, skipped the Niti Aayog meeting. The show of solidarity with Kejriwal by the four regional heavyweights and the ham-handed handling of the ‘protest’ by the Centre has inadvertently given a fillip to national unity.

‘‘Narendra Modi has done the unthinkable: he has helped unite opposition parties,’’ AAP leader Ashutosh wrote in an opinion piece on Sunday. Ashutosh’s primary objection was to the four democratically-elected Chief Ministers being not allowed to meet another democratically-elected Chief Minister. ‘‘Not allowing them to meet him is an insult to the will of the people whom they represent in their respective states. This, in no uncertain way, sends a message to the people in the states that could harm the BJP,’’ the article points out. This has also reinforced the argument of the opposition that they are not accorded the respect that an opposition deserves in a democracy, the article states.

However, the absence of Congress in the non-BJP formulation was more than apparent and constrained West Bengal chief minister Mamata Banerjee to remark, as she stepped out of the NITI Aayog meeting in Delhi, “We met the Home Minister and later the PM to ask him to find a solution to the problems in Delhi. Please ask the Congress why they are not here, I can’t answer for them.” Talking about the opposition’s unity for the 2019 Lok Sabha elections, she claimed that it was already there and it was up to the Congress to get involved in it. Meanwhile, in his address at the Niti Aayog gathering, Prime Minister Narendra Modi underscored that the Indian economy had grown at a robust 7.7 per cent in the fourth quarter of 2017-18 and the challenge now was to turn this to “double digits”.