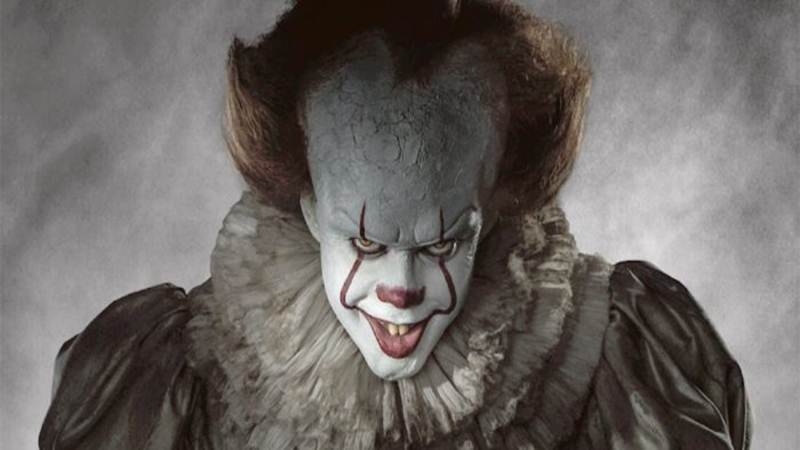 New Delhi: With Hollywood performing lower than what was expected, 2017 still had some movies which entertained us to the core. From intense ‘War for the Planet of the Apes’ to terrifying ‘IT’, the outgoing year had something for everyone.

While, there were many big budget films like ‘The Mummy’ reboot, ‘King Arthur’, ‘Ghost in the Shell’ and ‘Life’ which bombed on the box office, small budget movies like ‘Logan Lucky’, ‘Split’ and ‘Baby Driver’ ruled the hearts of the audiences and critics too.

With that being said, here are nine Hollywood’s Top Movies of 2017

One of the most unexpected hits of 2017, ‘Logan Lucky’ proves why Hollywood should give more and more chances to independent filmmakers to get into the industry.

The characters in this film are worthy of spinoffs; they deserve to be thought about instead of merely being laughed at.

All the moving parts are truly moving and makes this flick a crazy yet emotional ride.

One of Stephen King’s most iconic adaptation which made its way to the big-screen in 2017, ‘IT’ became a sensation in the minds of the people since the time of its inception.

‘The Dark Tower’, this year’s first adaptation of King’s iconic novels, bombed at the box-office which made the audiences worried for the horror classic. But, when you have a scary clown in the movie, what could go wrong? ‘IT’, the novel, is a brick of a book that at 1,300 pages long would be just as useful a murder weapon as it is a source of thrills.

The story focuses Seven young outcasts in Derry, Maine, who are about to face their worst nightmare — an ancient, shape-shifting evil that emerges from the sewer every 27 years to prey on the town’s children. Banding together over the course of one horrifying summer, the friends must overcome their own personal fears to battle the murderous, blood thirsty clown known as Pennywise.

Despite how truly frightening Pennywise is – every time he appears on screen, and it’s just the right amount of time, the audience watching the movie grew visibly uncomfortable.

The movie, lives and dies with the Losers; their carefully fleshed out stories, the bullying they endure, and the firm friendship that helps them survive. Unlike most horror films, IT is a drama first and which to be honest is quite refreshing. It’s a terrific set-up to what is going to be a restlessly-anticipated Chapter 2.

Watch the movie and YOU’LL FLOAT TOO!

After a string of flops in his kitty, ‘Split’ became the most triumphant movie for director M Night Shyamalan. Triumphant in two ways – Firstly, the movie ended his search for a hit and secondly, the critics and audiences got to know that Shyamalan still has the ‘firepower’ to make good movies.

McAvoy plays Kevin, a victim of childhood abuse who has slipped into a deep state of dissociative identity disorder in which, as a coping mechanism, he has created 23 distinct personalities, some of which are more sinister than the others. And in the opening scene of the film, one of his particularly menacing avatars kidnaps three young girls and locks them up in an underground cellar.

McAvoy’s performance here is nothing short of extraordinary. Though, we don’t get to see each of the 23 personalities, but Shyamalan wisely chooses to develop only a handful of them.

Shyamalan movies are known for its twist-in-the-end type of conclusions and no wonder he has given an incredible twist in this one too.

Split may not be of everyone’s taste, but the story, craftsmanship, and excellent performances will haunt you for quite a while. As will some beastly bits.

The moment you hear ‘Star Wars’, goosebumps start to take place all over your body. The eighth installment in the epic sci-fi franchise, titled ‘The Last Jedi’, has taken the world by storm and is in no mood to stop. Directed by Rian Johnson, ‘The Last Jedi’ is a rewarding experience for anyone who has stuck with this series through thick and thin.

‘The Last Jedi’ picks up right where the ‘Force Awakens’ (2015) left off. Luke Skywalker’s peaceful and solitary existence gets upended when he encounters Rey, a young woman who shows strong signs of the Force. Her desire to learn the ways of the Jedi forces Luke to make a decision that changes their lives forever. Meanwhile, Kylo Ren and General Hux lead the First Order in an all-out assault against Leia and the Resistance for supremacy of the galaxy.

The movie probably does the best job of any Star Wars film of capturing the allure of the Dark Side and the spiritual turmoil that would lead to-and also result from-its embrace. Director Rian Johnson delivered the best, most spiritual ‘Star Wars’ film since the ‘Empire Strikes Back’. It is one of the finest blockbusters of the year.

So just breathe and see the movie. THE FORCE IS ALWAYS WITH YOU!

If there is one movie that should have got some love from the audience this year, then it is Denis Villeneuve’s sci-fi epic ‘Blade Runner 2049’. The movie is a lot like the original film, and depending on your stance on that sci-fi classic, this could either be the best news you could’ve hoped for, or the worst. The movie is a story of Officer K (Ryan Gosling), a new blade runner for the Los Angeles Police Department, unearths a long-buried secret that has the potential to plunge what’s left of society into chaos.

His discovery leads him on a quest to find Rick Deckard (Harrison Ford), a former blade runner who’s been missing for 30 years.

This might be the best Harrison Ford movie in recent years; he keeps on getting better and better with each film. Meanwhile, Gosling cements his place as one of the great actors of this generation.

Visually stunning and narratively satisfying, ‘Blade Runner 2049’ deepens and expands its predecessor’s story while standing as an impressive filmmaking achievement in its own right.

In the movie, Caesar (Andy Serkis) and his apes are forced into a deadly conflict with an army of humans led by a ruthless colonel (Woody Harrelson). After the apes suffer unimaginable losses, Caesar wrestles with his darker instincts and begins his own mythic quest to avenge his kind. As the journey finally brings them face to face, Caesar and the colonel are pitted against each other in an epic battle that will determine the fate of both of their species and the future of the planet.

The flick is poetic blockbuster storytelling, the kind we don’t see enough of anymore. Director Matt Reeves continues to excel handling delicate subject material. Crafted by many immensely talented people, sculpted around a flawless central performance by Andy Serkis. And while no one is talking about it, but he surely deserves a nod for Academy Award for his performance.

The film combines breathtaking special effects and a powerful, poignant narrative to conclude this rebooted trilogy on a powerful and truly blockbuster note.

With this third movie, Reeves` ‘Planet of the Apes’ just got a step ahead of Nolan’s ‘The Dark Knight Trilogy’, when it comes the ‘Best of Trilogies’ in Hollywood.

A movie that changed the landscape of superhero movies in 2017. Director Patty Jenkins gave the fans what they needed, a superheroine who does not use any gadgets or manipulation as a superpower, her biggest strength lies in her pure heart. ‘Wonder Woman’ is like an old-school superhero movie, just like the Christopher Reeve` ‘Superman’.

Patty Jenkins, who many thought was a ‘gamble’ for the franchise, rises above the immense pressure piled on her. She delivers a film which proves that even in a genre as repetitive as this one, correct answers can still be found despite sticking to the formula, when you get each variable right. The stunt choreography is one of the finest you would have witnessed.

While everyone got really angry when Gal Gadot was initially casted as the Princess of Themyscira, she exactly knew how to make them mum and she did exactly that. She delivered a performance which not just had good acting skills but also had a heart. Her acting, the brilliant action sequences and the innocence she shows when she first encounters the world of men, is what makes her performance so special.

It is without a doubt, the best superhero movie of 2017.

If you thought that ‘Fast and the Furious’ is the most stylish action movie you have ever seen, think again friends, Edgar Wright’s ‘Baby Driver’ leaves ‘F & F’ movies biting the dust.

This Edgar Wright movie the best action movie since ‘Mad Max: Fury Road’ and also, in a fun twist, the best musical since ‘La La Land’. The movie revolves around getaway driver Baby (Ansel Elgort) relies on the beat of his personal soundtrack to be the best in the game. After meeting the woman (Lily James) of his dreams, he sees a chance to ditch his shady lifestyle and make a clean break. Coerced into working for a crime boss (Kevin Spacey), Baby must face the music as a doomed heist threatens his life, love and freedom.

With thrilling action scenes, interesting characters, a killer soundtrack and an exceptional editing that follows the beat of the music as if the music is a character itself, ‘Baby Driver’ delivers a hell lot of style and substance.

This is one ride you would not want to miss!

What do you need to make a perfect blockbuster? A real story, some likable characters, tense situations, war and a masked Tom Hardy. And who can combine all of them and make something epic for the viewers, none other than Christopher Nolan.

‘Dunkirk’, a film about men, created by men, is a force of nature – an elemental beast of a movie about finding the meaning of life surrounded by the meaninglessness of war.

The story revolves around the evacuation of Allied soldiers from Belgium, the British Empire, and France, who were cut off and surrounded by the German army from the beaches and harbor of Dunkirk, France, between May 26- June 04, 1940, during Battle of France in World War II.

Christopher Nolan, who is a master in taking the viewers on a ride that is both exhilarating and emotional too. The best thing he does with ‘Dunkirk’ is that all the powerful moments in the movie are because of the story and the visuals that he presented on the screen and not from the characters. With that being said, all the characters in the movie have done a superb job in giving fans a picture how would anyone feel when you are stuck on a beach with no roof, with no place to hide and the enemies are bombarding you from air.

Those air shots in WWII planes, which Nolan used in the movie, is nothing short of a miracle. The camera isn’t shaky and give us enthralling visuals.

In short, this two-hour movie serves up emotionally satisfying spectacle, delivered by a writer-director in full command of his craft and brought to life by a gifted ensemble cast that honours the fact-based story. Honourable Mentions – ‘Logan’, ‘Coco’, ‘Okja’ and ‘Wonder’.