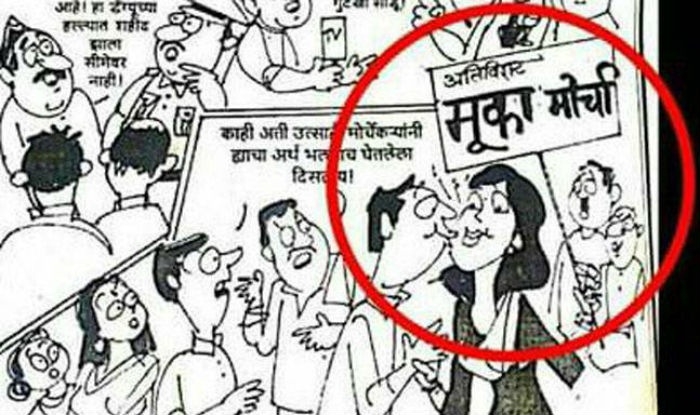 Mumbai : As the controversy around a cartoon published in Shiv Sena’s mouthpiece ‘Saamna’ has grown and triggered sharp reactions across the state, an FIR has been registered against party chief Uddhav Thackeray, executive editor and Member of Parliament Sanjay Raut, cartoonist Shrinivas Prabhudesai and the newspaper’s printer-publisher Rajendra Bhagwat.

The complainant in the case is advocate Vishnu Navale who filed a complaint at Nanal Peth police station, Parbhani, Marathwada region, under IPC Sections 153 A, 292, 505, 500, and 109. According to the complainant, the cartoon is FIR has been registered against party chief Uddhav Thackeray, executive editor and Member of Parliament Sanjay Raut, cartoonist Shrinivas Prabhudesai and the newspaper’s printer-publisher Rajendra Bhagwat.an insult to women who are protesting against the heinous rape in Kopardi, Ahmednagar.

Meanwhile, ‘Saamna’ cartoonist Prabhudesai has expressed regret over his work in a statement in the newspaper. He said, “The sentiments of Maratha community were hurt by my cartoon, but there was never an intention to hurt anybody. Yet, I express regret if sentiments were hurt unintentionally.”

“The controversy over the cartoon was unnecessary. I am an artist and not a political cartoonist. In a busy life, my intention is to put a smile on people’s face and thus I make cartoons,” he added.

The cartoon, which was published on Sunday, appears to have played with the words “Mook Morcha” (silent rally) and made it “Mooka Morcha” (kiss rally). The Sena drew immense flak from various political parties including its ally Bharatiya Janata Party for this attempt at humour. On Tuesday, enraged by the published cartoon, a pro-Maratha organisation, Sambhaji Brigade, stoned the office of ‘Saamna’ in Navi Mumbai.

The series of silent protests by the Maratha community have been going on in the state since August 9. The community, through these protests, have made three demands—reservation in job and education sector for the members of the community, a relook at the Atrocity Act and stringent punishment for the culprits of the brutal rape and murder of a 17-year-old Maratha girl in Khopardi, Ahmednagar.