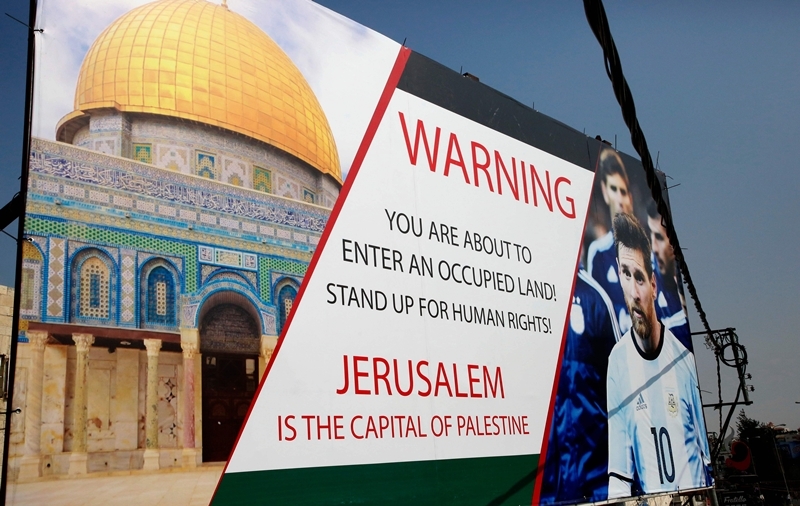 A picture shows a poster erected on a main street in the West Bank town of Hebron, denouncing the upcoming friendly football match between Argentina and Israel and calling Argentina's star Lionel Messi (portrait) to boycott the match. / AFP PHOTO / HAZEM BADER |

Jerusalem: A pre-World Cup football friendly between Israel and Argentina has been cancelled amid growing pressure from protesters calling for the match to be scrapped over Israel’s treatment of Palestinians, according to officials and players on Wednesday.

For lack of an official statement from either of the countries’ governing football bodies, Israeli newspapers cited the decision to stage the fixture in Jerusalem rather than Haifa, where it was originally scheduled to be played, as one reason behind the cancellation, although the Israeli embassy in Argentina cited threats directed at the family of star forward Lionel Messi as another driving factor, reports Efe.

Israeli President Reuven Rivlin said it was a “sad morning” for Israeli sports fans, including his own grandchildren.

“But there are values that are greater than even Messi. The politicisation of the Argentinean move worries me greatly,” he added.

In an interview with sports channel ESPN, Argentina and Juventus striker Gonzalo HiguaÃ­n said the right decision had finally been made, adding: “Health and common sense come first, so we believe it is right not to go.”

The fixture provoked mounting pressure from Palestinian rights groups, including the Boycott, Divestment and Sanctions movement, which welcomed the news that the game had been nixed.

The friendly had been re-scheduled to be played at the Teddy Kolleck Stadium in Jerusalem to mark the 70th anniversary of the creation of Israel. The Palestinian Football Association also thanked the Albiceleste for backing out.

Israel recently entered the international human rights spotlight again after dozens of Palestinians, including civilians, minors and paramedics, were killed and thousands injured when Israeli troops opened fire on groups of demonstrators gathered at the border of the Gaza strip, which has been blockaded by Israel for years.

Jerusalem has been a particular flashpoint for tensions, too, since United States President Donald Trump decided to move the US embassy and recognise the disputed city as the capital of Israel.

East Jerusalem, an area that Palestinians envisage as a future capital of a Palestinian state, has been occupied by Israel since 1967, in violation of international law and the 1949 Fourth Geneva Convention. Placed in Group D, Argentina kick-off their 2018 Russia World Cup campaign against Iceland on June 16.