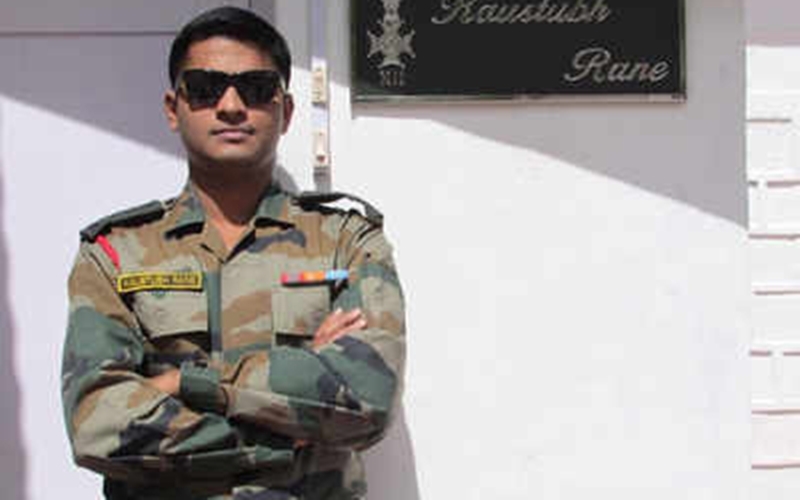 Bhayandar: As the entire nation and the twin cities of Mira-Bhayander in particular, mourned the death of Major Kaustubh Prakash Kumar Rane, on Tuesday, a bunch of politicians seemed to have been oblivious to the pall of gloom over the locality. A grand birthday celebration for municipal corporator Anand Manjrekar of the Bharatiya Janata Party (BJP), was in progress a few metres away from the major’s apartment in Mira Road on Tuesday evening.

Major Rane was among the four bravehearts who attained martyrdom in a fierce gunfight trying to prevent militants from infiltrating into the Gurez sector of north Kashmir’s Bandipora district.  Natives of Sadure village in Vaibhavwadi taluka of Sindhudurg district, the Rane family has been staying in the Hiral Sagar building in Mira Road’s Sheetal Nagar area since 1990.

Manjrekar, who represents ward number 17 (A) in the Mira-Bhayandar Municipal Corporation (MBMC), went ahead and arranged a birthday bash with much fanfare at a municipal ground in Jangid Estate.

With a huge banner featuring  images  of BJP leaders, including the Prime Minister in the backdrop, a stage was erected for cake-cutting and public reception. When contacted, Manjrekar claimed ignorance about the incident. “I was not aware about the unfortunate incident and learnt about it late in the night. We would have never celebrated the event had we heard about it

“We were shocked to see politicians celebrating at a time when the entire nation, especially the people of the twin-cities were in grief at losing their real-life hero,” said a local resident, requesting anonymity.

A stream of visitors,  including legislators, municipal corporators and  several functionaries from the local BJP unit trickled in to register their presence till late in the evening, unmindful of the sombre  atmosphere a few metres away from the venue.

The mortal remains of Major Kaustubh Prakash Kumar Rane were flown to Mumbai on Wednesday evening. The body was kept at INS Hamla for the public to pay homage. Major Rane will be accorded a state funeral at 9am on Thursday, at the municipal crematorium in Mira Road.