England vs New Zealand Auckland Test: NZ snare three to have England on the ropes 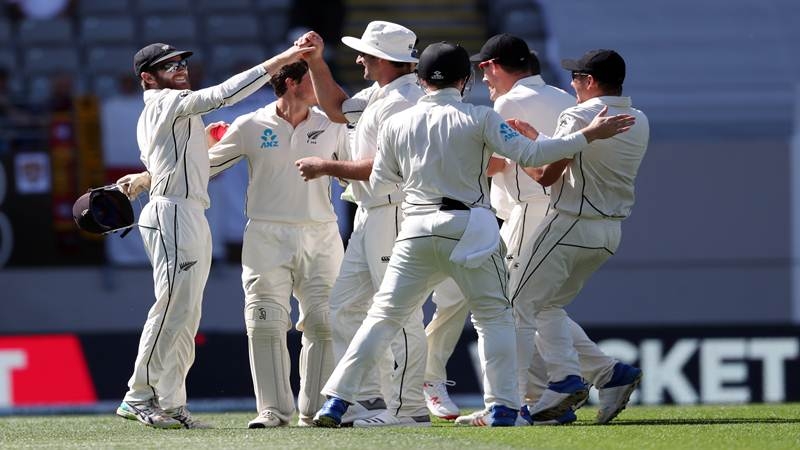 New Zealand's Kane Williamson (L) and teammates celebrate the wicket of England's Jonny Bairstow on the five day of the day-night Test cricket match between New Zealand and England at Eden Park in Auckland on March 26, 2018. / AFP PHOTO / MICHAEL BRADLEY |

Auckland: New Zealand had England fighting for survival at 217 for six with two sessions remaining in the first Test today as Ben Stokes played a lone hand to salvage a draw for the tourists. At tea on day five of the day-night Test in Auckland, with 63 overs remaining, England were down to their last four wickets and still 152 runs from wiping out their 369-run first innings deficit.

Stokes, who batted through the first session of the day, was on 26 having patiently played through 86 deliveries. England resumed the day at 132 for three and lost three wickets in the first session with Moeen Ali out on the last ball before tea for 28, lbw to Trent Boult. The umpire’s first instinct was not out but the decision was overturned on review.

At the start of the day, England added 10 runs in five overs before Dawid Malan jabbed at a Tim Southee delivery going across his body and was caught at second slip for 23. Jonny Bairstow was dropped twice as he dominated in a 39-run stand with Stokes — one a difficult chance down the leg side to wicketkeeper BJ Watling, before he had scored, and the other on 21 with a regulation chance that went through the hands of Boult.

But on 26 his luck ran out to a spectacular one-handed catch by Kane Williamson diving to his right at midwicket, to give spinner Todd Astle his first dismissal.