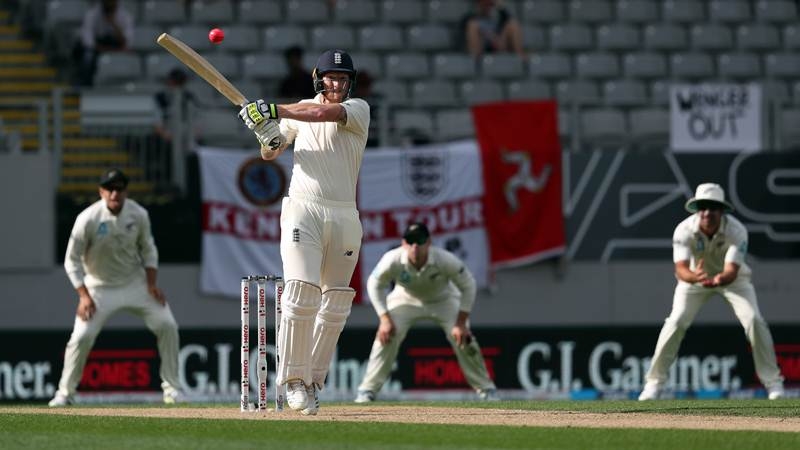 Englnad's Ben Stokes bats on the fifth day of the day-night Test cricket match between New Zealand and England at Eden Park in Auckland on March 26, 2018. / AFP PHOTO / MICHAEL BRADLEY |

Auckland: New Zealand captured the vital wicket of Ben Stokes on the last ball before dinner to have victory in sight with one session remaining in the first Test in Auckland today. England were 300 for seven with only three wickets remaining, needing a further 69 runs to make New Zealand bat again. Stokes played a defiant innings of 66 until he was undone in a short-ball barrage from Neil Wagner.

With the dinner break in sight he lost patience with the rising Wagner deliveries and clipped the ball to Tim Southee who took the catch running backwards at point. Stokes, at the crease since the start of the day, had batted through 188 deliveries in an attempt to save the Test for England who have been on the back foot since their paltry 58 in the first innings. Chris Woakes, who joined Stokes after Moeen Ali fell on the last ball before tea, was on 38 at dinner having added 83 with Stokes for the seventh wicket.

Woakes has had an element of luck with edges through and over the slips cordon early in his innings and an edge off Wagner that fell just short of Kane Williamson in the gully. New Zealand had their tails up at tea after taking three wickets in the first session when England progressed from an overnight 132 for three to be 217 for six. The day started badly for England with Dawid Malan out for 23 in the fifth over to have the tourists at 142 for four.

Stokes and Jonny Bairstow then advanced the score to 181 in a partnership of 39 runs off 128 deliveries. Bairstow was dropped twice, including a sitter put down by Boult, before he was out to another acrobatic catch by a flying Williamson for 26. Moeen Ali was out on the last ball before tea lbw to Boult with the umpire initially ruling in favour of the batsman before the decision was overturned on review.