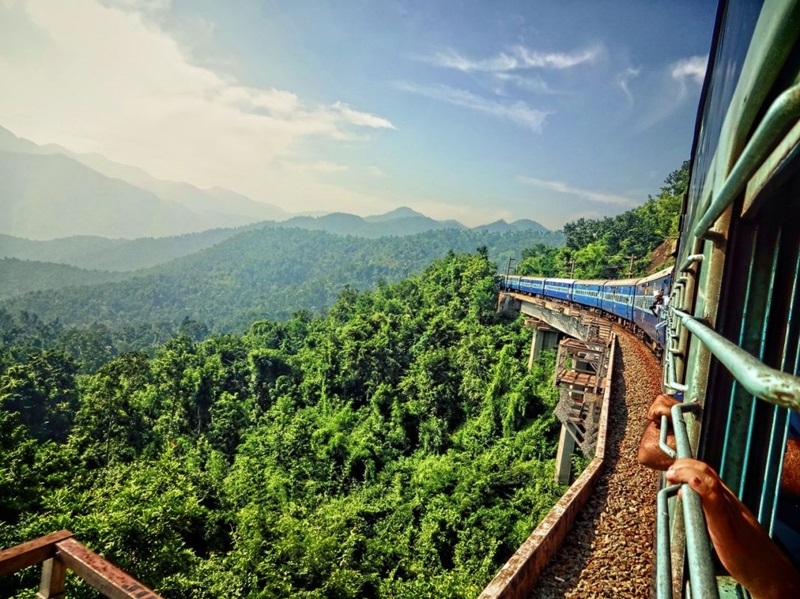 Strap: A scenic journey through pristine terrain and their lively tribal people leaves UDAY K CHAKRABORTY in awe of its serene beauty and lesser-known treasures

What could be more pleasurable than a quaint train journey that takes one from the sea level to the top of Eastern Ghats and beyond, as it chugs through tribal heartlands of Andhra Pradesh, Orissa and Chattisgarh. The railways had to construct this track in 1950s, for transporting iron ores from the Bailadila mines to Viskhapattanam Port. Until last year, just one passenger train travelled the entire route – the now fabled Kirandul Passenger (train No. 58501). This 469 km train ride takes about 15 hours. But, time passes effortlessly, as one observe through its windows changing scenes of truly pristine areas of interior India. Inside, one can meet diverse groups tribal co-passengers and watch their travelling ways.

Happy journey
As Kirandul Passenger leaves Visakhapattanam station at 6:50 am in the morning, we missed our breakfast. So, I was automatically alert when the only other co-passenger called over his mobile saying in something like, “…Speaking from L-Quota, can you arrange some breakfast in S-Quota”. As he was a railway staff, I enquired whether S-Quota meant some kind of breakfast in Staff Quota. After a hearty laugh, the fellow explained that L-Kota is a short form of Lakkavarapukota, the station the train had just left, and S-Kota is short for Sringavarapukota, the station somewhere ahead, where hot and heavenly Idli Vada was available! And, as the train would stop very briefly, he had only called to ensure the vendor came to our coach. That solved our breakfast problem!

The train took a left turn from the main line at Kothavalasa and soon started climbing up the hills through tunnels and bridges. The view was awe inspiring – with misty hills and green valley on one side and random waterfalls along mountain walls on the other. Abandoning the comfort of our AC coach, I secured some place at the door, for unhindered photography. 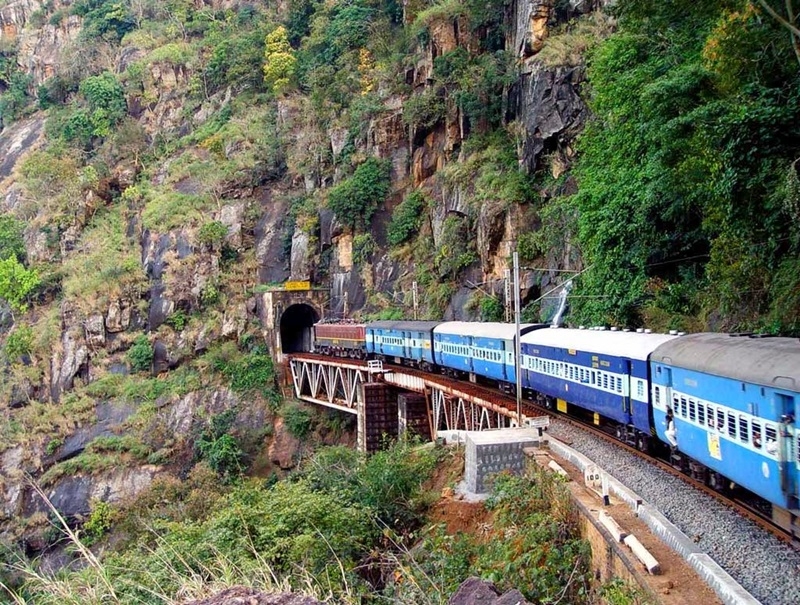 Later spending more time in lower class coaches allowed me to watch and interact with a lot of tribal passengers. How many Indian know that scientific evidence conclusively established the fact that tribals from these areas (particularly Gond tribe) were the ancestors of aborigines of Australia. In distant past such original Indians were advanced enough to take that long sea voyages! 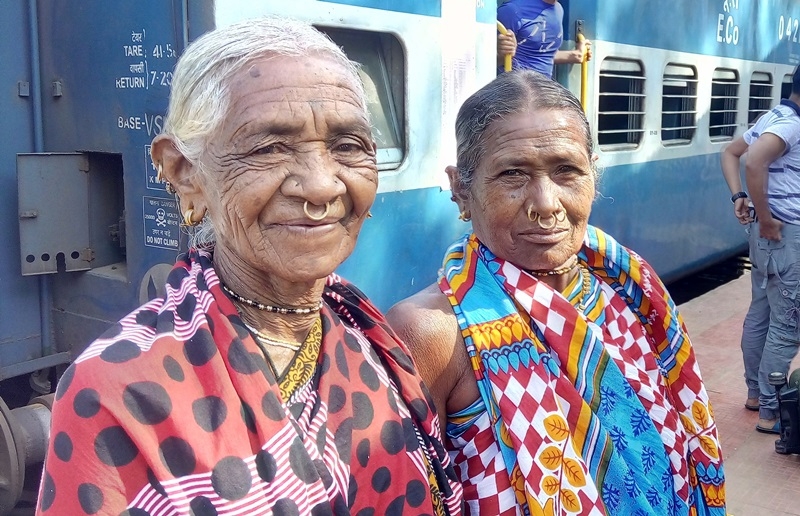 Up the Eastern Ghats
As the train entered the first tunnel, the entire train reverberated with shrieks from overjoyed children and young adults from all coaches. Their enthusiasm continued in varying degree during this stretch. A few attempted to count the number of tunnels, but then the spectacular landscapes beyond often diverted their attention. Later I found that the all 52 tunnels are actually numbered. Occasionally, the train entered such tunnels after traversing a wide arch, offering excellent photo opportunities.

Then there were also 84 bridges, over river streams and deep chasms between the hills. As the train reached even higher elevation near Tyda, I noticed the change in vegetation, with conifer pine trees on the hill slopes, coffee plantations and wild flowers. Area around Tyda is getting increasing attention from nature travellers due to its deep forests and adventure tourism.

Then, after slowly ambling over the famous Borra Cave, the train reached Barra Guhali station. We reached the next milestone at Shimliguda, which, up to a few years back, was the highest Broad Gauge station in India at an elevation of 996 Meters (a reputation, now taken over by Udhampur in J & K). At around 11:30 am, the train reached Arakku Station, where all tourists and many other passengers disembarked. Though relatively unspoiled, Arakku is increasingly becoming popular for its pristine beauty and tribal culture.

Descending to the hinterland
Tunnels and bridges remained recurring features even when the train took its descending path. Indeed, one of the most picturesque bridge crossing over Darappa Nala appeared at this stretch. The train continued to traverse in a sinusoidal path, as it had to avoid lower hills and huge water bodies. Lower valleys of this side are dotted with large natural lakes, picturesque villages, terraced paddy fields and sleepy rail stations. 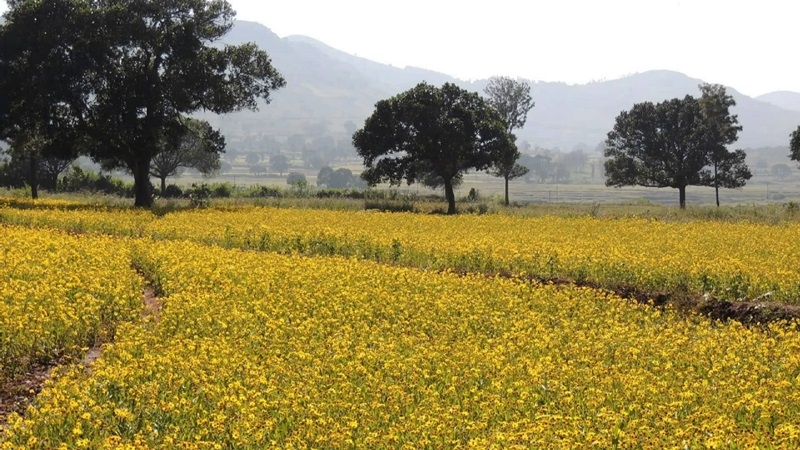 Koraput station, however, offered a little bustle, where there was a sizable presence of Khonda and Gond tribals from Orissa. Here, passengers from inside the train rushed to buy food, as no food supply was available afterwards. As the train moved further into tribal Orissa, we saw women wood gatherers, farmers winding up for the day and herds of cows grazing in the hills. After Jaypore, the last significant station in Orissa, a few deserted stations ushered us in to Chattisgarh. 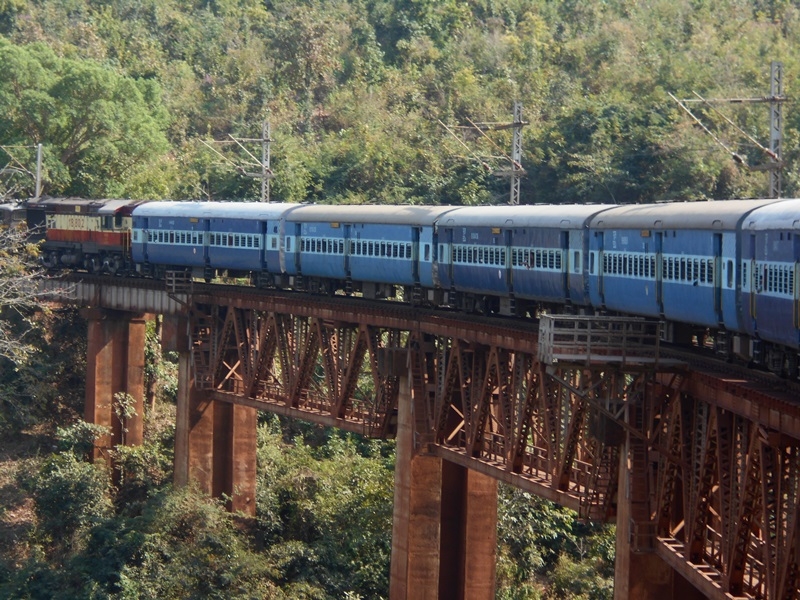 As the train approached Jagdalpur, the setting sun had already started painting the landscape in colourful hues. Here, almost all the remaining passengers got down. Only a few tribal vendors with sacks of goods got into the train. As the outside darkened, we could only see hazy silhouettes of trees and people, and trickling of voices in unknown languages from the platforms. As Dantewara arrived all the tribal vendors got down, leaving only the train staffs, security personnel and us.

One rail staff was rather surprised seeing us inside the train. Due to Maoist insurgency these days as Kirandul Passenger does not regularly venture beyond Jagdalpur.

So, virtually no local passenger takes this last stretch. Our slightly delayed train reached a deserted Kirandul station at 11:30 pm. Seeing no transportation at the station, we were a tad nervous. Thus began our new adventure in Kirandul, a mining town set amidst scenic range of hills.