Durga Puja 2017: All you need to know about Durga Puja’s 5-day events; what they mean

Mumbai: Durga Puja is considered as auspicious day as it is celebrates the victory of good over evil. It is believed that on this day Maa Durga has killed the demon Mahishasura. Durga Puja 2017 will start from September 26 and end on September 30 and, be it Bengal, Assam or Maharashtra, the festival will be celebrated with great fervour with slight differences here and there. Every city will have brightly decorated pandals with varied themes and spectacular Durga Maa idols.

The North Bombay Sarbojanin Durga Puja Samiti, which is one of the oldest and biggest Durga Puja is celebrating its 70th year. In this pandal, Bollywood celebrities like Kajol, Rani Mukerji and Ranbir Kapoor visit every year to take a blessings of Maa Durga.

While talking to Debu Mukherjee he says that, “I request people to come and see the decor this Durga Puja. It will be special and unique visual treat for devotees .Every year, we make it different and this year also we have put in our best to make it an experience.”

Also Read: Durga Puja 2017: Rituals, its significance, and all you need to know about Maa Durga

Take a look at the five-day events, and what exactly they mean

MAHASHASHTI: 26th September
On this day, Maa is welcomed with much fanfare. In the evening, the Kulo is decorated with Paan, Sindur, Alta, Sheela (stone), Dhaan etc..and amidst the beats of Dhaak and sound of Shaankh, Maa is welcomed… This is called Amontron and Adhivas – Maa’s Bodhon…Maa is being welcomed.

MAHASAPTAMI: 27th September
On this day the Kalash (Earthen Pot) is placed with a green Coconut and Mango Leaves . This is surrounded on all sides by a red thread and tied. This is called KALASH STHAPAN. The Kalash is an earthen Pot because Maa’s Murti is made of Ganga clay and Maa’s PRAAN (or life) is concentrated in the Pot. So the Pot is the symbol of Maa. The Puja starts with praying to Ganapati, followed by prayers to Maa. Another name of Maa Durga is NABA PATRIKA, which means nine trees i.e. Banana tree, Kochu tree, Haldi tree, Jayanti tree, Branch of Bel tree, Dalim tree (pomegranate) are tied together. The double Bel fruit is tied to the Banana tree. This is then taken to a river bank or sea and given a bath. When it is brought back it is draped in a white and red sari with sindur and it now looks like a married lady with her head covered. This is called KOLA BAHU. Many have a misconception that KOLA BAHU is wife of Ganapati but actually she is Maa Durga or Naba Patrika.. Ganapati’s mother 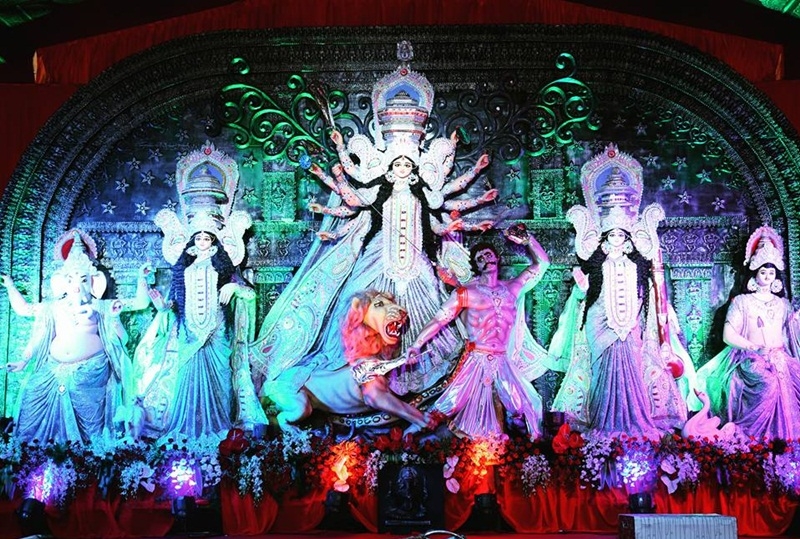 MAHA SNAN:
On this day Maa Durga is given a bath. First a vessel is placed in front of the Murti; a mirror is kept in the vessel, so that the reflection of Maa is seen in the mirror. The Priest applies Haldi and Mustard oil on the mirror, as though they are applying it on Maa before the bath. In earlier times when there was no soap, haldi and mustard oil were used for having bath. The Pujari puts different kinds of water, i.e. Coconut water, Chandan, Ganga jal, Sugar cane juice, water from seven holy seas to give her bath. During this time, mud from every region, as well as mud from Prostitute’s door is very essential. After bath the Pujari puts dhaan- durba and new sari with Maa’s name written on the mirror which is then placed on the Bedi (the place of worship).

PRAN PRATISTHA:
This means bringing life into the mirror. The Pujari takes Kusha and flowers in the right hand, and touches Maa from head to foot and with Mantra Path life is brought into the Murti, Mirror and Kalash.

MAHA AGAMAN:
Every year Maa comes either on a Palki or an Elephant or a Boat or a Dola (Swing), or a Horse etc. This Bengali year, Goddess Durga’s arrival on a boat (nauka) signifies natural gifts like good harvests but also floods. Maa Durga’s gaman (departure) – on a horse signifies devastation as was the case in the early days after war.

MAHA ASHTAMI PUJA: 28th September
Maa is now Maha Gauri- The Puja starts with Mahasnan & Maha gauri puja. The Puja is done to give Maa the strength of the 64 Yoginis. This is a Puja of 9 pots. Then the weapons of Maa are worshipped.

SHANDHI PUJA:
This is the puja when Ashtami Puja ends and Navami Puja begins, so the name Shandhi puja. This is considered to be the most vital time, meeting (shandhi) of Ashtami and Navami puja. The duration of this Puja is 45 minutes. At this moment Maa is CHAMUNDA. 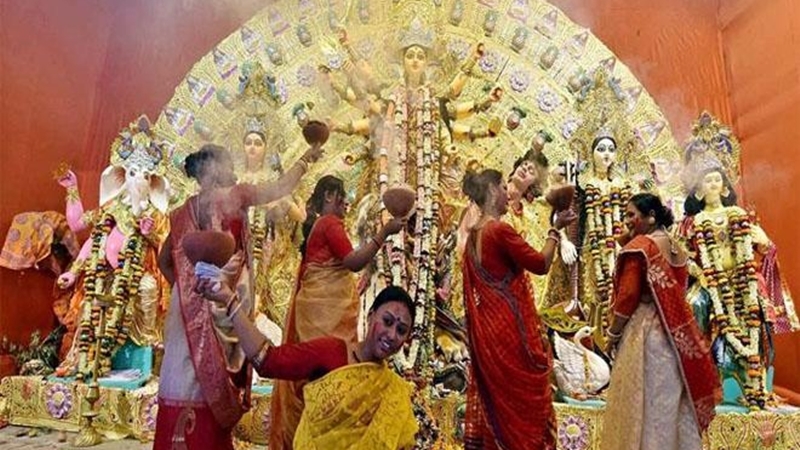 Pushpanjali: Prayer offering
Bhog is offered which consists of fruits and sweets are offered to Maa, followed by “NEET BHOG” , consisting of Rice, Ghee, Dal, Fried Vegetables, Chutney and Payesh. This prasad is later distributed amongst the devotees which is called KANGALI BHOJAN.

At this time 108 diyas are lit and 108 lotus are offered to Maa
There is a famous story that Lord Ram prayed to Maa Durga offering 108 lotus at her feet in order to defeat Ravan. But to his surprise he found one lotus missing, to replace it, he wanted to sacrifice his eye and pray to Maa.. at that moment Maa appeared in front of him and stopped him..returning the missing lotus to him. She then blessed him for his “VICTORY”.

MAHA NAVAMI PUJA: 29th September
On this day, Maa is SIDDHI DHATRI. This Puja starts with Ganapati Puja and then puja of all the other DEV and DEVIS are performed..followed by Maha Snan of Maa.

BIJOYA DASHAMI:- 30th September
On this day Maa had defeated and killed Mahishashur.

DEVI PUJA:- bhog
Bhog with curd, honey and milk is offered to Maa.. this is called CHARANAMRIT. The pujari sitting on the Asan takes a flower near the sacred pot and keeps it in the Northern direction because Maa is from KAILASH.
Then the pujari takes the sacred mirror which was on the vessel and performs the ritual of Visharjan. This is the same mirror which was used to welcome Maa because her reflection is on the mirror. 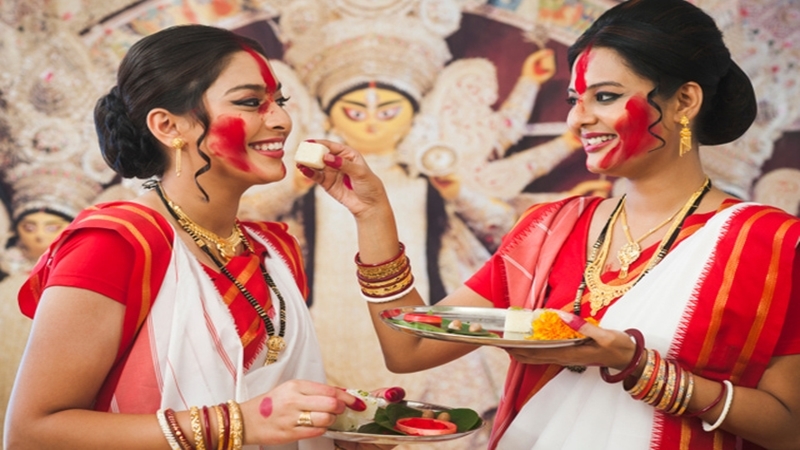 VISHARJAN:-
During the Visharjan of the Murti, all the devotees either go to a river bank or sea and immerse the Murti in the water.

SHANTI JAL: –
The sacred pot is brought back from the river/sea filled with the water where the Murti is immersed. Then the pujari chants the Mantra and sprinkles water with the help of mango leaves on the head of all the devotees for peace and happiness.