Driver lets langoor drive the bus full of passengers, KSRTC suspends him; this is what Twitter has to say 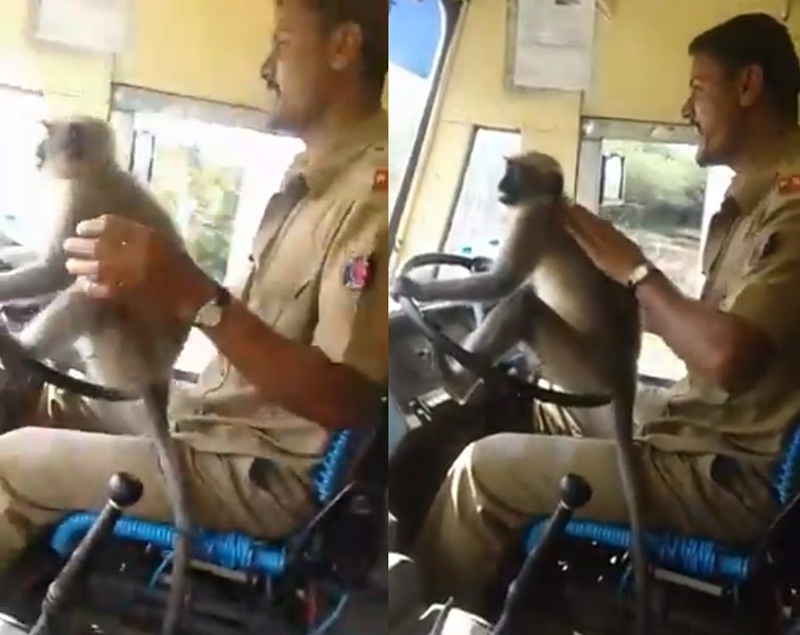 On Saturday a video went viral which showed a monkey drive a bus filled with passengers. And after the video went viral the driver of the bus who willingly lets the monkey drive the bus was suspended. The video shows the langoor sitting on the steering wheel of the bus and turning them around. The bus driver on the other hand can be seen screaming with joy while he changes the gear.

According to the video, the langoor sat by the steering wheel for over a minute.

#WATCH Viral video from Karnataka’s Davanagere of a KSRTC bus driver driving with a Langur perched on the steering wheel. The bus driver has been suspended for endangering the lives of the passengers. pic.twitter.com/RexZAfKZdr

The incident took place in a KSRTC bus which drives from Davangere to Bharamasagara. KSRTC’s Divisional Controller told The News Minute, a media website, “It appears a passenger on the bus has shot the video and it has come to our notice only today. We have removed the driver from duty because the safety of passengers and the quality of their journey is our first priority. We are looking into the incident because we are getting a lot of calls about this”.

While no complaint was made toward the bus driver by any passengers, he was suspended because other bus driver complained about him at KSRTC.

“We have removed the driver from duty and have asked the divisional security inspector to conduct an inquiry. He won’t be assigned any other duty till the probe is completed. He could even be suspended,” said a KSRTC official while talking to Times of India. He also said that Prakesh is an animal lover.

The video was shared by ANI yesterday and after it went viral, people started replying to the ANI tweet with some saying that the action to suspend him was correct while others said that the action taken was wrong.

So sweet. Why suspend. He should have been warned to not repeat this.

He should not be suspended.he should be given a chance

Yeah indeed sweet, it would hv been more sweeter or even sweetest if u had a first hand experience by sitting in front passenger seat . It’s the safety of the passengers which was stake…

Good that action is taken and he is suspended, but clearly he is in wrong job, this man is a sensitive animal lover (see how langur trusts him) and could be an asset in wildlife related jobs. But unfortunately Indian authorities/decision makers are too incompetent to value these.

I would have transferred him from transport department to Animal welfare(or forest) department with a bonus.