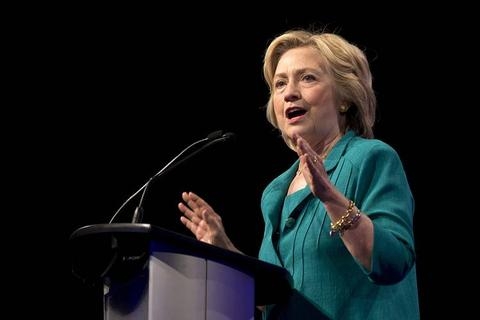 Washington: In a scathing attack on Donald Trump, Democratic presidential nominee Hillary Clinton has said her Democratic rival is not only unfit to be commander-in-chief but also a danger to America’s national security.

Addressing a well-attended election rally in Kent in the battleground State of Ohio, Clinton said Trump cannot be trusted to command nuclear arsenal, alleging that he would lose his cool during a national security crisis and has a foreign policy vision contrary to America’s values and geopolitical goals.

Trump also has a history of praise for dictators like Saddam Hussein and ties to strongmen like Vladimir Putin, whose government is trying to influence US elections and put its thumb on the scale for Trump, she said.

“I am running against a man who says he doesn’t understand why we can’t use nuclear weapons. He actually said, ‘Then why are we making them?’ And he wants more countries to have nuclear weapons. Japan, South Korea, even Saudi Arabia.  Imagine nuclear weapons smack in the middle of the Middle East,” the 69-year-old former secretary of state said.

“If you’re telling yourself he’ll surround himself with smart people who’ll stop these crazy ideas, remember this, when he was asked who he consults on foreign policy, Donald Trump said he didn’t need to consult because he said and I quote, ‘I have a very good brain’. He said he knows more about ISIS than our generals do. No, he does not,” Clinton asserted.

Clinton alleged that the people Trump has had around him include two men whose activities are reportedly being investigated for their ties to Russia — Vladimir Putin and Putin’s allies.

“I started saying last June, I believe, that Donald Trump has proven himself temperamentally unfit and totally unqualified to be President and Commander-in-Chief,” she said and asked the audience if they can trust someone to command US nuclear arsenal and make literally life and death decisions about war and peace.

“How do you handle a crisis? And do you know the difference between our allies and our adversaries? We’ll start with nuclear weapons,” she said.

“Now, I know there are some who will say that any discussion of this topic could be fear-mongering, but I don’t think so and in part of what you just heard from Bruce Blair. When dozens of retired nuclear launch officers publicly state that Donald Trump should, and I quote, ‘not have his finger on the button’, then this is a topic that can’t be avoided,” Clinton said.

The former secretary of state said Trump has repeatedly suggested that more countries should have nuclear weapons. “He must not realise or care that the more nuclear material there is in the world, the more likely terrorists are to get their hands on it — or that someone will miscalculate and start a war that can’t be stopped,” she said.

“When a few more countries go nuclear, their neighbors will feel pressure to do so as well. One of the reasons I worked so hard to impose sanctions on Iran so that we could get them to the negotiating table was so we would not have a nuclear arms race in the Middle East and I am proud that we put a lid on Iran’s nuclear weapons program,” Clinton said.

“But even the prospect of an actual nuclear war doesn’t seem to bother Donald Trump. ‘Good luck, enjoy yourselves, folks’, was what he had to say about a potential nuclear conflict in Asia,” she said wondering if he knows that a single nuclear warhead can kill millions of people.

“These are weapons today far more powerful than the bombs that destroyed Hiroshima and Nagasaki during World War II. To talk so casually, so cavalierly about mass annihilation is truly appalling,” Clinton said.