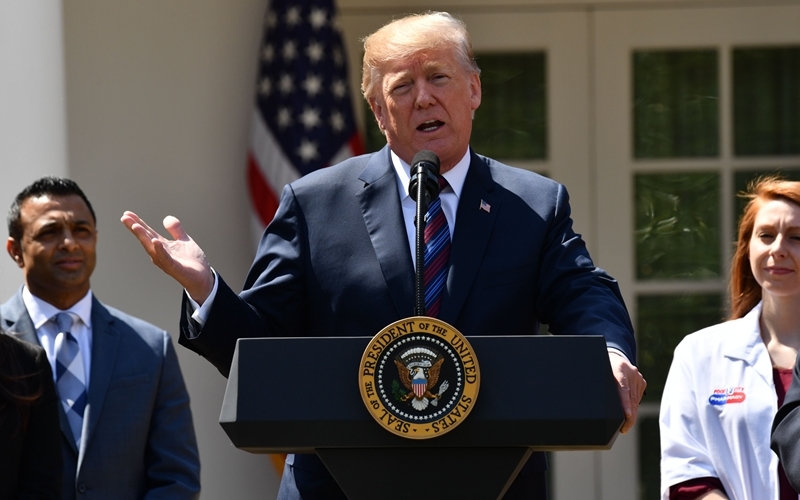 Washington: US President Donald Trump has reacted cautiously to North Korea’s threat to cancel a planned summit with Kim Jong-Un next month, saying “we’ll have to see.” after Pyongyang publicly voiced its concern over being pushed “into a corner” on nuclear disarmament.

North Korea yesterday threatened to abandon planned talks between Kim and Trump if Washington insists on pushing it “into a corner” on nuclear disarmament.

Trump said the US has not been notified about Pyongyang’s threat to cancel his historic summit with North Korean leader Kim on June 12 in Singapore.

“No decision. We haven’t been notified at all (about the threat). We’ll have to see,” Trump told reporters yesterday as he welcomed the President of Uzbekistan Shavkat Miromonovich Mirziyoyev to the White House.

Asked if Kim is bluffing, he replied, “We’ll see what happens.” When asked if he will still insist on the denuclearisation of the Korean Peninsula, Trump said, “Yes”.

A statement published by the state-run Korea Central News Agency said North Korea would never accept economic assistance from the US in exchange for unilaterally abandoning its nuclear programme.

Pyongyang’s nuclear weapons programme has seen tensions on the Korean Peninsula reach ratchet up in recent months, prompting fresh rounds of sanctions and fiery rhetoric from Trump and Kim.

At their planned summit in Singapore, the two leaders are expected to discuss ways to improve US-North Korea relations as well as the denuclearisation of the Korean Peninsula.

“This is something that we fully expected. The President is very used to and ready for tough negotiations, and if they want to meet, we’ll be ready, and if they don’t, that’s OK, too,” she was quoted as saying by CNN.

Asked whether the goalposts had been moved for the talks, she said only that the parameters were still being discussed.

“These are ongoing conversations,” she said. “Beyond that I don’t have a lot to say, other than what we’ve already laid out what our priorities are when it comes to these conversations and that we’re going to be prepared if it takes place.” Reacting to the reports from Pyongyang, the White House earlier said it was “still hopeful” the summit will proceed despite North Korea’s threat to cancel it.

The State Department also said it was going ahead with preparations for the summit as planned earlier.