Advertisement
Home / Cmcm / Discovering the green side of New Delhi

Discovering the green side of New Delhi

Open space comes at a premium in Mumbai. With parks and maidans fast shrinking to give way to real estate in the city, one experiences a strange delight in the vast expanse of the Lodhi Gardens in New Delhi, which uplift the visitor to another world, apart from transporting one to another era, writes Mallika Iyer

The idea of New Delhi conjures up notions of politics and power, images of the Red Fort and Qutub Minar, associations of women’s safety and bad air quality. But amongst these associations is another one that is not generally known.

Delhi is also said to be one of the greenest capital cities of the world. Every street, every avenue, every by-lane of the city is lined with imposing trees and Lodhi Gardens in the heart of the city, is one of its many green havens. As one enters the gardens from the Kadam gate, one is met by the imposing structure of the Bada Gumbad, belonging to the Lodhi period (1451-1526), standing alongside the Bada Gumbad mosque, which along with its corner turrets and jharoka balconies, has an interesting feature. The Mihrab, that is the niche in the mosque that indicates the direction of prayer, is flanked by the kalash, a motif that is an auspicious iconography of Hindu architecture. Opposite the Bada Gumbad, the Shish-Gumbad (glass dome), is another piece of architecture which also combines elements of Hindu architecture with the Islamic style. Glazed blue ceramic tiles outside its façade give it the name Shish Gumbad. These structures appear as a symbol of the unending synthesis of cultures that India has been witness to for centuries.

As one walks a little further into the garden, past joggers moving briskly and senior citizens with a measured pace, alongside dog walkers and around yoga enthusiasts striking poses on their colourful mats spread out on the grass, one stumbles upon a little mosque in ruins with walls dating from the later Mughal period. The fragrance of the Champa and the cool shade of the Neem invite one further inside, where one discovers a bridge built by the Mughal Emperor Akbar. The Athpula is a bridge with eight (aath) piers and seven arches over a stream that joined the Barahpulanala that joined the Yamuna river. 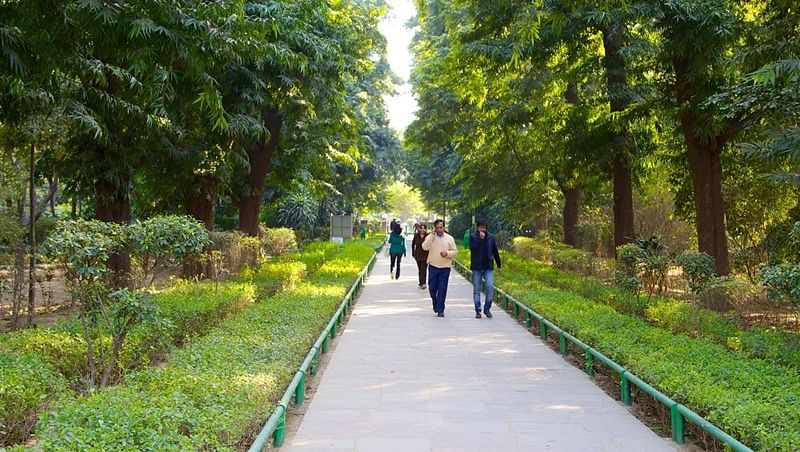 A neat row of royal palm trees leads to Muhamad Shah Sayyid’s tomb containing several graves including that of Muhammad Shah Sayyid and is one of the only monuments of the Sayyid period. Further inside the gardens is the tomb of Sikandar Lodhi, after whom the gardens are named.

TrrTrrTrr…Eurasian collared dove with its fan like tail, calls out from every direction as a variety of birds from babblers and mynas to orioles and parakeets fill the park. A group of senior citizens laughs under the shade of the Keekar trees. ‘Bus mobile pe enter karo…kaam ho jata hai aajkal!’ a septuagenarian share with an octogenarian the wonders of a smart phone. ‘It is too premature to say anything about the GST yet,’ a tall Sardarji remarks, as he walks briskly past the retired crowd along with his friend. ‘Have you tried Patanjali products?’ their wives walking a few feet behind them are lost in another discussion. ‘IIT mein admission mila, toh life ban jayegi meri,’ a young boy with boxing gloves, shares his dreams with his friend whilst practising boxing. ‘Garma garam moong dal ke pakode le lo!’ a peddler sells his wares. Bustling with life in the early hours of the morning is Lodhi Garden, where the young emerging India meets the bygone era, around the tombs of dead emperors who once ruled.

A tourist in New Delhi has much to see. For it has a story to tell from the days it was supposed to be the famed Indraprastha of the Mahabharata to the times when its streets were bloodied by the worst massacres and episodes of history. But as one makes one’s way around the many sites and monuments of the city, one would do well to turn towards the city’s trees. And no better guide can one find to discover the green side of the city
than The Trees of Delhi by Pradip Kishen, a fantastic field guide to Delhi’s trees. 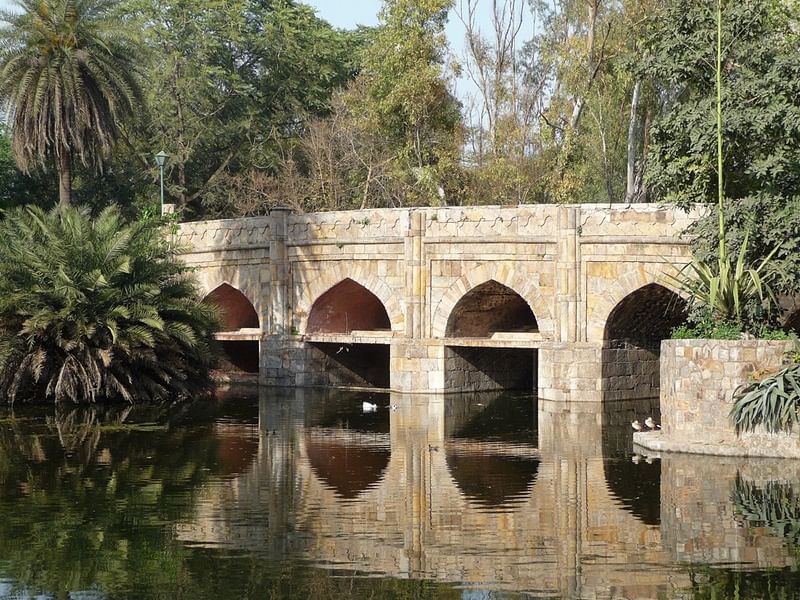 So, the next time you visit Delhi, and are lured by the sites of the Red Fort and the sounds of the qawwali at Hazrat Nizamuddin, by the shops at Connaught Place and the food at Chandni Chowk, take in also the fragrance of the Champa and the colours of the Jarul bursting with flower.

Soak in the fantastic cascade-like blooms of the Laburnum and the shade of the Keekar. And when a journey of discovery of Green Delhi beckons, Lodhi Gardens is a great place to start.