It’s the evergreen Dev Anand’s 6th death anniversary. In 50s and 60s, he was famous for his mufflers, scarves, jacket and signature puff. Dev Anand remains an inspiration to many youngsters with his wardrobe with vibrant colours in desi fusion and western look. His films and iconic dances still mesmerise us.

Take a look at some Bollywood actors who are inspired by his style, and his dance in today’s films.

We all know that Ranbir Kapoor is a freestyle actor. He does a lot to give best performances in the character, for e.g. in the recently released Jagga Jasoos and Barfi. In the Tamasha song ‘Matarghasti’ along with Deepika Padukone, he danced like Dev Anand and also put a muffler around his neck, and pulled it off well.

Bollywood’s most energetic actor Ranveer Singh was seen in Lootera. The maker wanted Ranveer to emote solely with his eyes. A source close to the production had revealed then, “When Ranveer was signed for Lootera, there were a few changes that he needed to employ in his acting. Being a period film, the movie demanded Ranveer to emote with his eyes. And being a director’s actor, he took up the challenge by attending workshops and watching Dev Anand’s movies.” Dil Chahta Hai was a super hit film of the 2000s. The film was a trend setter for youngster, starring Aamir Khan, Saif Ali Khan and Akshaye Khanna. The film is about three young boys who enjoyed life as teenagers. Saif Ali Khan’s song ‘Wo Ladki Hai Kahan’ had the actor portraying shades of Dev Anand. He put a muffler around his neck and drove a car like Dev Anand did in ‘Chudi Nahi Ye Mera Dil Hai Dekho Dekho Tute Na’.

Shah Rukh Khan’s production ‘Jab Harry Met Sejal’ starred Anushka Sharma and himself. It is reported that, Shah Rukh role was inspired by Dev Anand in ‘Guide’. In Jab Harry Met Sejal’, Shah Rukh plays the character of a tourist guide. The movie shows the journey of Harry and Sejal, who fell in love with each other. 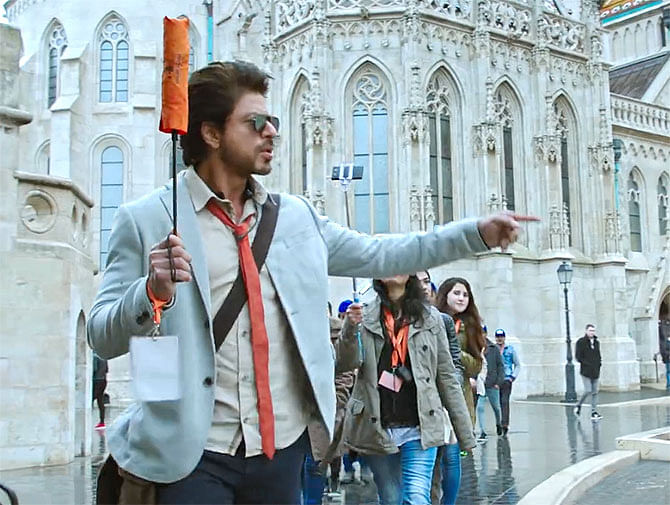