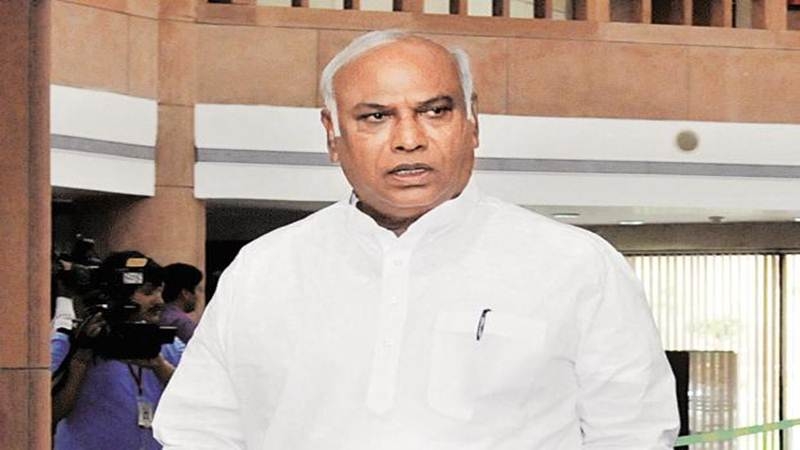 Gulbarga (Karnataka): The Congress Party has described the detention of their vice-president Rahul Gandhi for the second time as undemocratic and warned that the Centre is inching towards promoting dictatorship.

Gandhi was detained by the Delhi Police for trying to meet the family members of an ex-serviceman who allegedly committed suicide over delays in implementation of the one rank one pension scheme for the armed forces. High drama unfolded in Lutyens’ Delhi with both Congress and AAP workers staging protests over the alleged highhandedness of the government.

Leader of Opposition in the Lok Sabha Mallikarjun Kharge told ANI, “The detention of Congress vice president Rahul Gandhi at Ram Manohar Lohia Hospital is undemocratic. Now we know that the Narendra Modi government is heading towards dictatorship.”

“People are fighting for OROP for a very long time and Congress also tried to solve the issue and set right the anomalies,” he added.

“When Rahulji reached the hospital to meet the kin of the victim, then arresting and detaining him is against democracy and we condemn the act,” Kharge said.

The senior Congress leader alleged that the Modi government is curbing the voices that are being raised against his regime, and warned that the latter risked facing heavy repercussions.

“Not only soldiers, but every citizen will fight against this wrongdoing,” Kharge added.

Earlier in the day, Gandhi was detained at the RML Hospital when he tried to meet the family members of ex-serviceman Ram Kishan Grewal, who allegedly committed suicide last night over the One Rank-One Pension issue, and taken to Mandir Marg police station. He was detained for around 70 minutes before being released.

Angry at being detained by Delhi Police, Gandhi took a dig at Prime Minister Narendra Modi. “Let’s see how long I have to wait here. I am certain that I will talk to the family. This is a strange behaviour. This is Modi’s ji’s country,” Gandhi told ANI here.

Gandhi being detained twice by the Delhi police amid high drama and the movement of Chief Minister Arvind Kejriwal restricted snowballed the protest.

Several leaders of Congress and AAP including Deputy Chief Minister Manish Sisodia were also held by the police even as Rahul and Kejriwal tore into Prime Minister Narendra Modi.