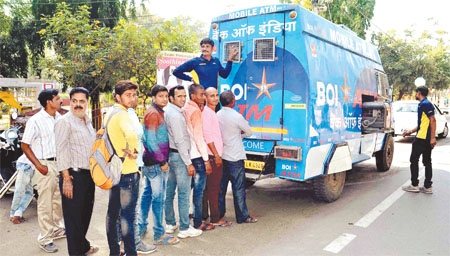 Ujjain: Decision to scrap currency notes of Rs 1,000 and Rs 500 denominations has led to cash crunch among common people. Serpentine lines of customers were seen outside most of the banks on Wednesday too.

Even eight days after demonetization, people are forced to queue up in banks and ATMs. Most of them are forced to return home dejected without enough money in their purse to meet their daily needs. Most of the banks lack sufficient money to disburse to customers or to exchange against defunct currency notes. Branches of IDBI, HDFC, State Bank of Patiala, Bank of India and so on insist on depositing old notes instead of exchanging them. As per RBI and Ministry of Finance directives people can exchange their old notes by furnishing identity proof at any bank within allowed limit.

Most of the medical stores of the city too are refusing to accept old notes in violation of Union government and RBI orders. In this, regard state head of Indian Chemists and Druggists Association Gautamchand Dhing said that wholesalers have refused to accept old notes. Hence, retailers too are declining to accept them.

Meanwhile, indelible ink was brought into use in banks from Wednesday afternoon. The ink mark will be put on finger of people exchanging old notes to avoid more than one exchange in a day. According to information, the crisis is expected to smoothen away in coming days.