New Delhi: The Congress party appears to have taken their app ‘With INC’ off Google PlayStore. A cursory search for the app on Apple App Store also fails to throw up any results for the Congress app.

Clicking on links which come up after a Google search reads, “This content is not available in your country yet. We’re working to bring the content you love to more countries as quickly as possible. Please check back again soon.” French security researcher Baptiste Robert, who is known by his Twitter username Elliot Alderson, also put out a tweet saying, “Did @INCIndia removed their #android #app from the PlayStore just before my tweet?”

Earlier in the day, Robert had tweeted, “The IP address of http://membership.inc.in is 52.77.237.47. This server is located in Singapore. As you are an #Indian political party, having your server in #India is probably a good idea.”

The IP address of https://t.co/t1pidQUmtq is 52.77.237.47. This server is located in Singapore. As you are an #Indian political party, having your server in #India is probably a good idea. pic.twitter.com/tbspCtOPfB

The development comes hours after Bharatiya Janata Party (BJP) IT cell head Amit Malviya questioned the Congress party for sharing the personal details of its app’s users with a Singapore-based firm. 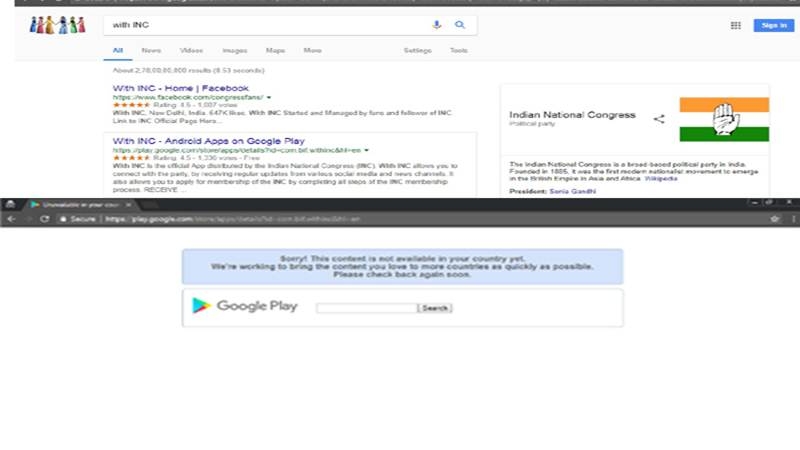 On Sunday, Congress party president Rahul Gandhi, in his tweet, had questioned Prime Minister Narendra Modi’s official app ‘NaMo’ and alleged that it shares details of users to some firms based in the United States of America.