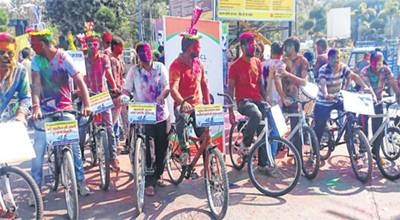 Ujjain: A totally unique ‘Cycle ger’ was held on Rangpanchmi by the District Cycle Polo Association to spread message of cleanliness to the citizens. Apart from this, people were also informed about the health benefits and environmental protection done by riding bicycles.

After that, the ger passed through the main roads of city like Dewasgate, Malipura, Daulatgunj, Kanthal, Satigate, Gopal Mandir, Gudri Chauraha, Mahakaleshwar Temple and ended at Bharat Mata Temple. At Daulatganj and Gopal Mandir, different social organisations welcomed the ger. More than 50 youths participated with their own bicycles. Herbal gulaal, tricycles for publicity and drums were used in the cycle ger.

Smart City CEO Awadhesh Sharma also gave 10 smart city cycles for the ger on the request of association’s State president Nishchal Yadav and district secretary Utkarsh Sengar. Sengar informed that the cycle ‘abhiyan’ has been going on from September 3, 2017 with the motive of making people aware about the environment. The goal is to ride cycles for 100 weeks. So far, 27 weeks have been completed.