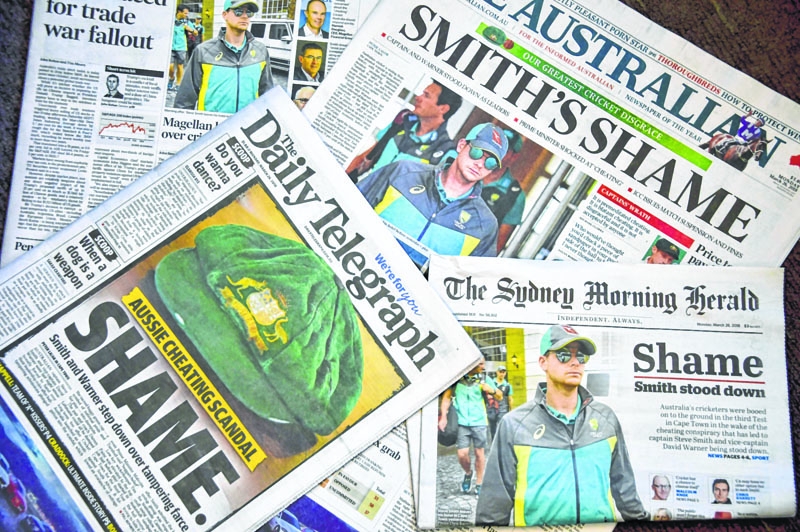 TOPSHOT - Photo shows Australian cricket captain Steve Smith on the front pages of the major newspapers in Sydney on March 26, 2018. Australia's cricketers have heaped disgrace and humiliation on the country, the local press said in blasting the "rotten" team culture under the current leadership following captain Steve Smith admitting he cheated by hatching a plot to tamper with the ball during the third Test against South Africa in Cape Town on March 24, 2018. / AFP PHOTO / Peter PARKS |

Sydney : Being Australia’s cricket captain is widely seen as the second most important job in the country behind prime minister. Many would argue it holds even more prestige.

This high esteem, and Australians’ deep love of the game helps explain the stunned disbelief that has greeted skipper’s Steve Smith’s admission that he cheated, and even worse, that it was planned.

In an astonishing development, the captain said he hatched a plot to tamper with the ball against South Africa, which saw Cameron Bancroft use yellow sticky tape on Saturday in Cape Town to try and alter its condition.

Everyone from former Test greats, to the Australian Sports Commission, and the public condemned what happened, with the story dominating front pages, television news and coffee shop chatter.

Cricket, long considered the gentleman’s game, is more than a sport in Australia — it is widely seen as helping shape the country itself, with its British origins helping foster and develop the national character, morals and ideals.

Wearing the baggy green cap of the national team is sacred, an honour earned by barely 450 people. “To cheat is just not in the spirit of what Australians do. They fight hard, they play hard, but they don’t cheat,” cricket fan Steve Chaka told AFP in Sydney. Another, Giovanni Cettolin, said Smith’s lapse of judgement was “definitely not good sportsmanship for an Australian”.

“Us Aussies all dig in and fight hard, you know, and obviously he didn’t do that. It’s a shame, it really is.”

As Jaimie Fuller, executive chairman of the Skins compression wear group of companies, explained in a full-page newspaper advert Monday: “Cricket is such a part of our national psyche that it helps define us.

“It helps give us a sense of what is fair, and what is not; what is right and what is wrong.” He said Cricket Australia had a moral responsibility to display good governance in how it responds to the scandal. “If you don’t, it’s not just the Australian cricket team who is shamed, but it will be all of you. It will be cricket. And it will be all of us.” Catherine McGregor, author of the book “An Indian Summer of Cricket”, said it would take a long time for the Australian public to forgive “this cruel betrayal”.

“No other game is so self-conscious in revering noble defeat, nor in insisting how it is played is more important than the result,” she wrote in the Sydney Morning Herald. She added that the anger of cricket lovers around the country was understandable. “They are the true believers. This team is unworthy of them,” she said.

Cheating in order to win at any price ‘just isn’t cricket’. To cheat is just not in the spirit of what Australians do. They fight hard, they play hard, but they don’t cheat.