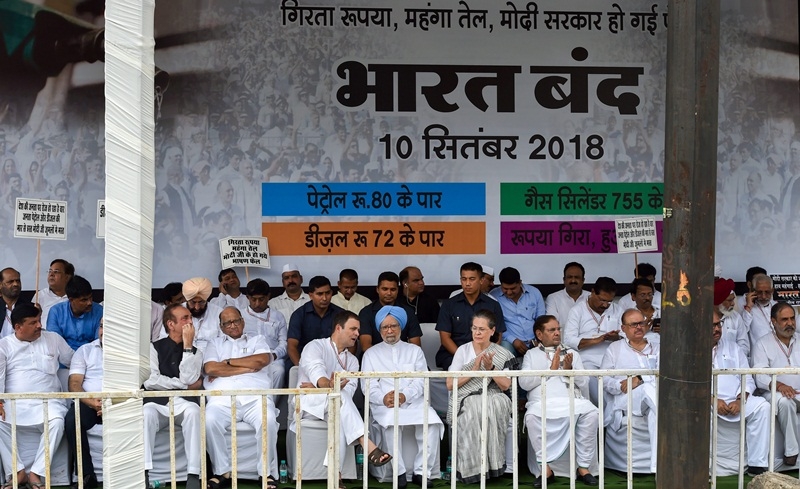 Mumbai: The state-wide shutdown called by the Congress and other opposition parties against high fuel prices received a lukewarm response in the state and Mumbai. Maharashtra Navnirman Sena (MNS) actively participated in the bandh, but the Shiv Sena kept a distance. There were few incidents of disruption reported on local trains, Metro line at D N Nagar and MNS workers were involved in rampant vandalism of shops.

The centre of bandh was Andheri railway station, as Ashok Chavan, president of Maharashtra Pradesh Congress Committee (MPCC) travelled by local train to join it. All Congress leaders Manikrao Thakare and Sanjay Nirupam, president of Mumbai Regional Congress Committee were seen protesting at Andheri. Police detained Nirupam while he tried to disrupt local services. Many Congress leaders were detained by police and the party workers were pulled away from railway tracks to restore train services.

MNS workers led by Sandeep Deshpande showed their strength at Dadar and vandalised some shops at Dadar and Wadala BEST depot. Interestingly, shops at Dadar remained shut on Monday. At Chembur, MNS leader Karna Durbale and party workers vandalised around 40 vehicles. MNS stopped vehicular traffic for some time on Mumbai-Pune expressway. Nationalist Congress Party (NCP) too supported the bandh. Nawab Malik, spokesperson was leading in the forefront at Govandi and Panjrapole circle. Surekha Pednekar, Mumbai NCP women president, Chitra Wagh participated in the rasta roko andolan at Byculla, along with Samanajwadi Party and Congress party workers. All 36 talukas of 5Mumbai, NCP workers and leaders were on the streets.

In fact women workers of the party came out on streets at Borivali and lay on the road to bring traffic to a standstill. NCP leader of the house in BMC at Ghatkopar led the protests. The train, taxi and BrihanMumbai Electric Supply and Transport services were running as usual. Shops and establishments were kept shut till afternoon. There have been 14 cases of bus vandalism reports.  In Pune, MNS damaged a Pune Municipal Corporation (PMC) bus in the city’s Kumthekar road area in the morning, it was business as usual for most shops and establishments across the city.

Most petrol pumps, however, remained shut for security reasons. Schools and colleges continued to function normally in the district. Robust security ensured that commute was not hit in Pune city. Supriya Sule, Member of Parliament of NCP led the rally in Pune while senior Congress leader Radhakrishna Vikhe-Patil headed his party’s protest in Ahmednagar district. Bus services, however, were thrown awry in Nashik district in North Maharashtra as commute was afflicted during the shutdown.

The protest fared better in districts in the Marathwada region. Protests and sit-ins were observed throughout Aurangabad, Beed and Jalna districts as Congress activists were seen raising slogans against the Modi government, mocking the BJP-led National Democratic Alliance (NDA) for skyrocketing fuel prices.

In the evening, Congress claimed the bandh was successful, Sanjay Raut, Shiv Sean’s Member of Rajya Sabha claimed it had flopped.  “Congress missed the timing of bandh. These are festive days and hence people did not participate in the bandh. If they had approached Sena earlier, they would have thought of participating,” said Raut.