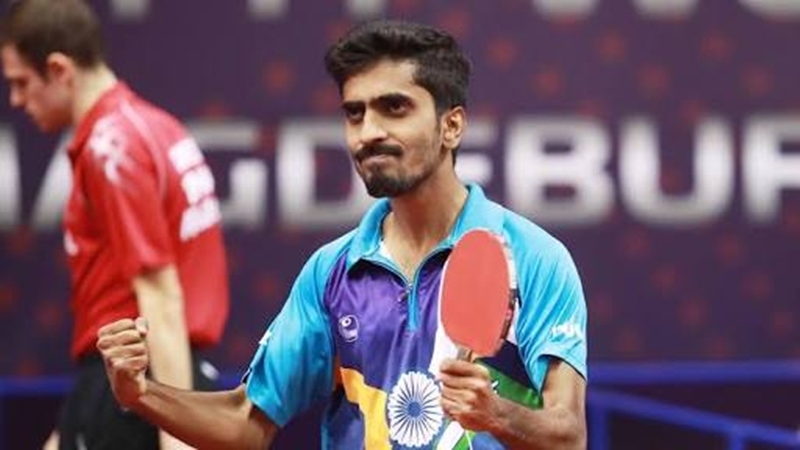 Chennai: India’s number one men’s table tennis player G Sathiyan, who won three medals on his Commonwealth Games debut, says the country has a good chance of finishing on the podium at the upcoming World Championship. “It has been a great performance. Great experience playing in my first Commonwealth Games.

I have played a lot of tournaments, Pro-Tour events. But this is very different from normal Pro-Tour events. “There was lot of pressure and expectations. I was happy that I was able to take the pressure and do well. Winning three medals is a great achievement for me,” he told PTI in an interaction.

Apart from the gold in the men’s team event, the Tamil Nadu player won a silver in the men’s doubles partnering A Sharath Kamal, and a bronze in the mixed doubles with Manika Batra at the Gold Coast Games. Sathiyan, who has risen to No. 46 in the latest ITTF World Rankings, said the good showing by the country’s players bodes well for the forthcoming World Championship in Sweden and they could even win a medal if they continued the hard work. “Yeah… the World Championship. It is a dream.

About two years ago, we won the second division and qualified for the first division. We are all pumped up… high on confidence after the great show in the CWG.  “I think we had really worked hard. It is going to be much much tougher, of course. We have top countries, China, Japan, Korea.. everyone playing out there. We will try our best and try to probably even win a medal. That will be a great achievement. We are going to set our targets high and try to push for a medal in the world team championship,” the Chennai-based paddler said.

Sathiyan said playing in a multi-discipline event like the CWG was a great learning experience and being successful gave him a lot of confidence going into future tournaments. “It has been a great experience playing in my first multi-discipline event (CWG). Being part of such an event gave me a lot of learnigngs. Being successful in my first Games gives me a lot of confidence going into the forthcoming tournaments,” he added. Sathiyan, who won a historic bronze medal in the mixed doubles with Manika, was all praise for his partner and said she had shown everyone what can be achieved with hard work. “It (the CWG) has been excellent.

Table tennis was on a all-time high, winning a medal in every event. Also, we won eight medals for the first time and we won the mixed doubles medal for first time ever in the CWG,” he said. “Also in the women’s singles, Manika did a great great job. She played very good table tennis, set an example for all the girls in the country on what hard work and what women can achieve in the sport.

“Men have been doing well and the women are also coming up. They are also capable of doing very good. She has set a good standard for women table tennis players,” Sathiyan said.  He further said table tennis was on the right track in the country and India will soon be a superpower in the world of table tennis. “I am very happy that table tennis has got its due importance. The way we have worked hard, we are playing very good.

The sport is on the right track. We will soon be a superpower in the world of table tennis,” he added. He said adding a medal in the Asian Games and reaching the top 20 in the rankings were among his targets.  “I hope to work even harder, keep my training schedules. The achievements in the CWG inspire me to do much more better. The target is to enter the top 20 in the world.

And of course, Asian Games medal is a target, it is going to be tougher than the Commonwealth Games. Let us see if I push my boundaries and make the country proud further in the forthcoming tournaments,” he signed off.