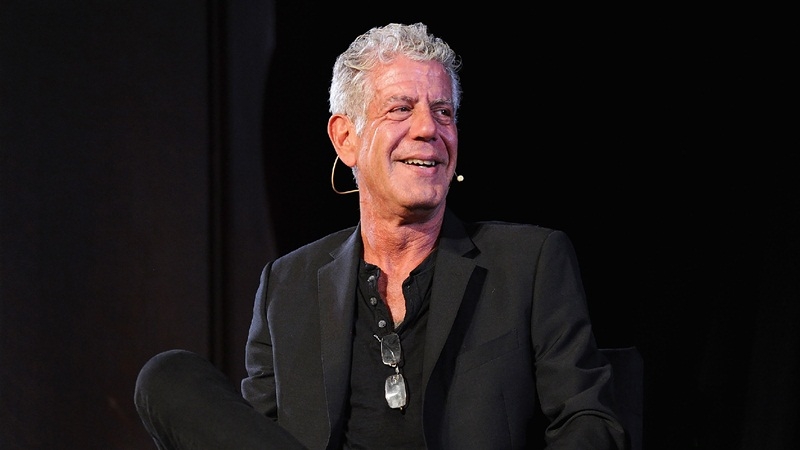 (FILES) In this file photo taken on October 07, 2017 Chef Anthony Bourdain speaks onstage at New York Society for Ethical Culture in New York City. Food author and travel host Anthony Bourdain has committed suicide while traveling in France, according to the television network CNN for which he took viewers around the world for his show "Parts Unknown." He was 61. / AFP PHOTO / GETTY IMAGES NORTH AMERICA / Craig Barritt |

New York: Renowned chef, food critic and writer Anthony Bourdain has died of a suspected suicide. He was 61. Bourdain, best known for his CNN series “Parts Unknown”, was in Strasbourg, France, to shoot for the new season of the show, reported the network.

“It is with extraordinary sadness we can confirm the death of our friend and colleague, Anthony Bourdain,” CNN said in a statement.  “His love of great adventure, new friends, fine food and drink and the remarkable stories of the world made him a unique storyteller. His talents never ceased to amaze us and we will miss him very much. Our thoughts and prayers are with his daughter and family at this incredibly difficult time.”

The TV personality’s friend, French chef, Eric Ripert, found him unresponsive in his hotel room today morning. “Tony was an exceptional talent. Tony will be greatly missed not only for his work but also for the passion with which he did it,” CNN President Jeff Zucker said in an email to employees. Bourdain became popular with his best-selling book “Kitchen Confidential: Adventures in the Culinary Underbelly”, which was an expose on the world of haute cuisine.

He began his television journey in 2002 with “A Cook’s Tour” on the Food Network. In 2005 he joined the Travel Channel with “Anthony Bourdain: No Reservations”. He picked up two Emmy Awards for the series. Bourdain joined CNN in 2013 with a new travel and food series “Parts Unknown”, which is currently in its 11th season. The same year, Peabody Award judges honoured Bourdain and the series for “expanding our palates and horizons in equal measure.”     “He’s irreverent, honest, curious, never condescending, never obsequious. People open up to him and, in doing so, often reveal more about their hometowns or homelands than a traditional reporter could hope to document,” the judges said.

He also served as a narrator and executive producer for PBS series “The Mind of a Chef” and frequently appeared as a guest judge on “Top Chef”. Bourdain was also a favourite of former US President, Barack Obama. In 2016, when Obama visited Vietnam, he met Bourdain for a special meal and also appeared on one of the episodes of “Parts Unknown”. Bourdain was married twice, firstly to his high-school sweetheart Nancy Putkoski in 1985. They divorced after 20 years.

Two years later he married mixed martial artiste Ottavia Busia and they had a daughter, Ariane, born in 2007. He blamed the split partly on his constant travel for work. Last year he was romantically linked with Italian actress Asia Argento. Soon after the news of his death broke, tributes started pouring in on social media.

CNN political commentator Keith Boykin, said: “So sorry to learn of Anthony Bourdain’s death. He was an inspiration to me as a broadcaster, an athlete, and a citizen of the world. Just two days ago, I was telling a friend how Bourdain’s example inspired me to return to MMA training.”    Actor Busy Philipps said she was “truly devastated” and called for people in need of help to “reach out”.

Celebrity chef Gordon Ramsay said he was “stunned” by the news and shared the number of suicide prevention helplines.  “Stunned and saddened by the loss of Anthony Bourdain. He brought the world into our homes and inspired so many people to explore cultures and cities through their food. Remember that help is a phone call away,” he tweeted. “This is utterly heartbreaking. Thank you for opening our eyes to parts of the world both cherished and unknown. What a legacy. Sending peace and love to his family,” singer-songwriter Mandy Moore posted.

“Breaking Bad” star Bryan Cranston wrote,” According to American Foundation for Suicide Prevention, there are nearly 45,000 suicides every year in the US. Shocking. I was saddened to hear of the deaths of Kate Spade and Anthony Bourdain. RIP. It illustrates that success is not immune to depression. We all need to be more aware of our friends who are suffering.”