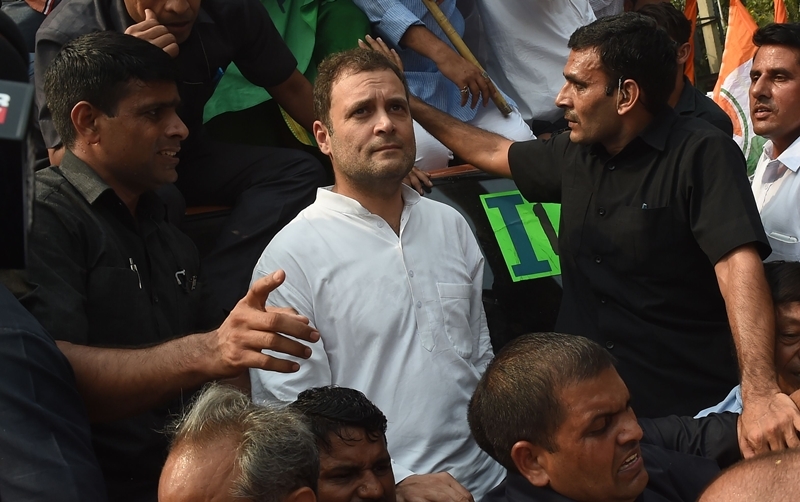 Rahul Gandhi during a protest outside the CBI office in New Delhi. Photo by Money SHARMA / AFP |

New Delhi: Stepping up their attack against the National Democratic Alliance (NDA) government, the Congress party has started their protest outside Central Bureau of Investigation (CBI) offices across India demanding the reinstatement of the premier investigative agency’s director Alok Verma.

The party is also demanding an apology from Prime Minister Narendra Modi for allegedly destroying the image of the investigative agency. The Congress has termed the Centre’s move to send Verma on leave as a disgraceful attempt to prevent an investigation into the alleged Rafale scam.

Scores of protestors raised slogans against the Centre’s decision and displayed placards reading, “CBI has stopped all investigation since BJP came to power”, “CBI: Closed Bureau Investigation.”
The Congress leaders, along with their party workers, are marching from Dayal Singh College on Lodhi Road to the CBI headquarters at JLN marg here.

In Lucknow, Uttar Pradesh Congress Committee (UPCC) chief Raj Babbar led a protest against the Centre. Similarly, in Bihar, the Congress workers took to streets expressing angst over the decision to send Verma on leave.

Earlier in the day, Rahul had tweeted, “Join us today at 11 AM as we march from Dayal Singh College on Lodhi Road to the CBI HQ, to protest the PM’s disgraceful & unconstitutional attempt to block an investigation into the Rafale scam by removing the CBI Chief. Similar protests are being held today, across India.”

Gandhi on Thursday linked Centre’s action against Alok Verma with a probe into the alleged Rafale scam, which, he claimed, was about to be conducted by the Verma. He said that the Prime Minister panicked anticipating an investigation.

However, the CBI on Thursday informed that Alok Verma and Rakesh Asthana, who were sent on leave, will continue to remain the CBI Director and Special Director, respectively.

M Nageshwar Rao, who was appointed as the interim director of the CBI will look after duties and functions of the CBI Director in the interim period till the time Central Vigilance Commission (CVC) looks into the allegations. Verma and Asthana were sent on leave by the government on Tuesday midnight after they charged each other of accepting bribes.

Asthana has been charged with extortion and forgery in addition to the bribery and corruption charges. It has been alleged that he received a bribe from an accused to give him a clean chit in Moin Qureshi case. He was heading the Special Investigation Team (SIT) that was probing Qureshi’s case.