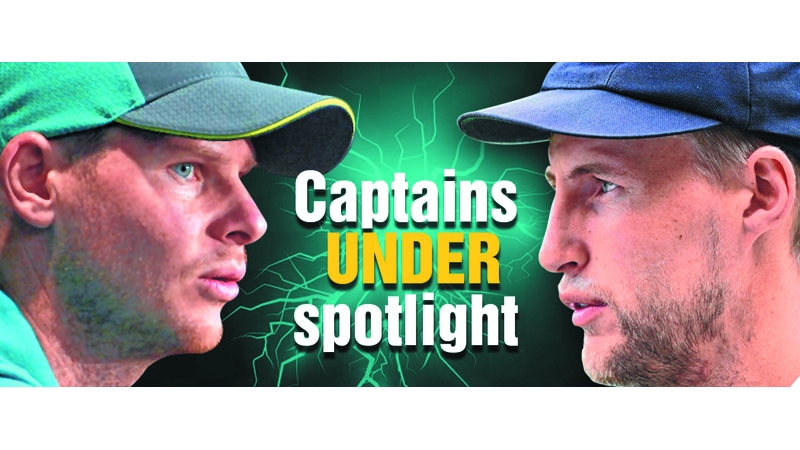 Smith may be an unorthodox run-scorer but he is currently top of the Test batting rankings and England skipper Joe Root, a more classical stylist, is second in that table.

London : Two of the world’s best batsmen will be in opposition when Australia’s Steve Smith and England’s Joe Root both lead their countries for the first time in an Ashes Test at Brisbane.

Smith may be an unorthodox run-scorer but he is currently top of the Test batting rankings and Root, a more classical stylist, is second in that table. Shoring up a fallible top order is something both Smith, with assistance from David Warner, and Root, backed up by a left-handed opener of his own in Alastair Cook, have got used to in recent months. If either star batsman struggles for runs, it is liable to damage their team’s prospects and add to the pressure that confronts most captains in an Ashes series.

At 28, Smith is two years older than Root and the more experienced captain, having led Australia in 26 Tests, whereas Root has just come off his first home season as skipper. After series wins over South Africa and the West Indies, the Ashes is the Yorkshireman’s first overseas tour at the helm.

Neither of the two captains is known for especially unusual tactics, while they’ve each shown it is possible to play aggressive cricket without resorting to over-the-top ‘sledging’, verbal abuse. When Smith was recalled to the Australia side during the 2010-2011 Ashes series, he said: “I’ve been told that I’ve got to come into the side and be fun.”

That led to mocking taunts of “Tell us a joke, Smithy” from England when he came out to bat. He was dropped soon afterwards but fought his way back into the Australia side during the 2013-2014 Ashes. At this stage, Smith had only gone beyond 50 six times in 28 Test innings, and averaged 33. But the third Test at Perth saw Smith compile his maiden Test hundred and he has not looked back since, with his ability to improvise shots on the legside now a familiar sight. It took Smith just 99 innings to score 20 Test hundreds, an achievement all the more impressive given he needed 23 knocks to get his first ton.

“I probably didn’t look back and reflect on much until my 50th Test match at the SCG (Sydney Cricket Ground) (this January against Pakistan) and after that game the team doctor, Peter Brukner, said I am one of three players to have played 50 Tests and averaged 60,” Smith told Wisden Cricket Monthly magazine. “Now with 20 hundreds, and hopefully a lot more cricket in front of me, it would be nice to get up there.”

Root once had a reputation for being “cheeky”, but that doesn’t mean he has larked around as skipper. In August, his declaration left the West Indies needing to score 322 runs in just over a day to win the second Test at Root’s Headingley home ground.  Thanks to a brilliant unbeaten century by Shai Hope, the West Indies pulled off a remarkable win. If Root proved too reliant on James Anderson and Stuart Broad come the last day, there was hardly any criticism of his declaration when he made it. Since then occasional off-spinner Root has had to deal with losing vice-captain Ben Stokes after the all-rounder remained in England following a late night fracas outside a Bristol nightclub. Root has scored 1,059 runs in 10 Tests this year ahead of the Ashes, including three hundreds. He has arrived in Australia desperate to atone for a poor first tour Down Under in 2013-2014, when England were thrashed 5-0 and Root was dropped for the final Test. “I think one thing for me (this time) will be making sure the game is played at my pace, trying to be nice and calm and collected out in the middle — and feel really ready for that aspect of Test cricket, which you do experience here in Australia,” said Root.