Bollywood films which showcased an understated love for India

Films that weren’t intended to be patriotic but showcased an understated love for India – and brought a lump to our throats… Shubarna Mukerji Shu relives the magic.

No matter how indifferent we are towards the many things that make us Indian, no matter the clothes we choose to wear, no matter the language we speak (or write in, as is the case with us at Cine Blitz) phir bhi dil hai Hindustani and there is absolutely nothing that can change that sentiment. The fluttering Indian flag tangling with the breeze is a personification of emotions raised up right to the skies for us proud-to-be-Bharatiyas. However, over the years we have begun to shed fewer tears when we watch the movies that speak about the Freedom struggle. We have started taking our Independence for granted. And yet once in a while there comes a movie that makes us aware. Aware of that heart that still leaps a little at the sound of our national anthem! Let’s admit it, it does that every time we hear it, even if it is a mere mandate when the film is about to begin, or when Kajol’s onscreen son sings it shrilly with his fellow students, at a school annual day function in Kabhi Khushi Kabhie Gham. We love our India, passively but reverently. Perhaps that is the reason why the obvious patriotism doesn’t hit us as hard, perhaps that is why the films that weren’t intended to be the most patriotic ones, showcased their understated love for India and made our love of our nation more tangible. Here are a few scenes from select films which didn’t start off to be patriotic and yet made our heart swell with pride…

When Shah Rukh Khan speaks we like to listen; he keeps making us fall in love, bit by bit. It could be his persona, his eyes and practically his DNA (for we already are head over heels for Aryan and AbRam) so when he chose to be silent, a little brooding, we went mad trying to reach out to him and smother him with love and more. What he left us with was a reason to love him more – Chak De, India.

The film is best known as one of the peaks of Shah Rukh’s illustrious career but today we want to remind you of one particular scene that comes to mind whenever we see our national flag fluttering high on a flag post.  He didn’t have to say much, “Pehli baar kissi gore ko tiranga leherate hue dekh raha hoon!”…and we were bowled over. It is true that not many, if any at all, sitting in the theatre would have known the struggle for Independence personally, and yet for that moment we unanimously gravitated towards that one emotion, that need to somehow embrace our legacy we invariably take for granted.

…Which brings us to Swades, yet another Shah Rukh Khan film which made us believe that “Apne hi paani mein pighal jaana, baraf ka mukaddar hota hai”. We were no longer in such a tearing hurry to pack our bags and leave this nation. Given our country is one of the youngest nations of the worldtoday, it is about time films today cater to the younger generations. If there were a few movies that spoke to our youth, saying just what they needed to hear, it was perhaps SWADES and RANG DE BASANTI. After all, patriotism is not only defending your country in the presence of others, it is also working towards making a difference to those who live here. “Aye saala… abhi abhi, hua ya keen… ki aag hai mujh mein kahin…’ Words, a song, a sentiment that we needed to feel right in our core to know we have it in us to also make a difference… To realise that we, too, could be a part of the bigger picture. Somewhere post the release of RANG DE BASANTI, we might have all at some point sung out the song with all the emotion we could gather into our voices, feeling the need to shout it out to the world that we might be young, but are determined to make a difference. Yet, sometimes a song is just not enough. At other times, no words are needed; merely someone else’s gratitude is enough to make us want to do more. Sozzled, driving around the streets of Delhi, a bunch of boys stop their car to hail the martyrs at India Gate. What a moment, sirji! Somehow that one little scene in Rang De Basanti awakened the gratitude we should all have been feeling to our forefathers for winning us the freedom we today enjoy. Since then, candle-lit protests have become our voice when nationally distressed. And the film, of course, has become history.

There was yet another lone voice that unrestrainedly spoke everything we didn’t know we wanted to say, on A Wednesday. Naseeruddin Shah showed us the power of the common man in a rather twisted, unfathomable story that left us all wanting to be a part of his mission. We might not have actively picked up arms or bombed the terrorists like he does in the film but yes, we didn’t want to shut up and be cursed with resilience once again. Yes, it is patriotism when you want to clean away the ‘cockroaches’ from your nation. Unconventional, slightly jingoistic, but patriotic all the same!

For that matter, a simple, outwardly fun film like Lage Raho Munna Bhai, perhaps did more to resurrect Gandhism, than any of the films in the past have managed. One film, and suddenly the Father of the Nation was best described as ‘bande mein tha dum, vande mataram!’ Suddenly, for a nation that thought we could have fought more vehemently, we realised that resilience needed strength too. Of course, that is what the director, Rajkumar Hirani had wanted to accomplish, unlike Farah Khan who wanted only to make a musical and ended up touching our Indian core. Deepika Padukone stopping in her tracks because she didn’t want to let her country down in the climax of Happy New Year, was unexpectedly moving to say the least. The film might be completely ridiculous but we all agreed that when it is our nation at stake, we won’t skulk around doing nothing; we will make a difference or die trying. 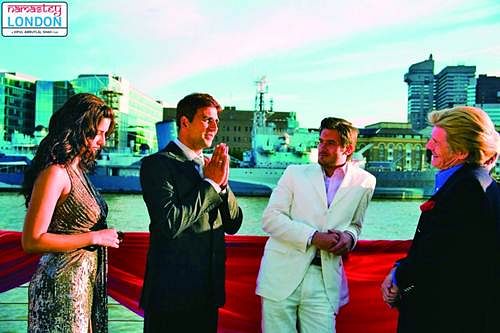 We won’t allow another to run us down, no sir we won’t. We are good, better than good and it’s about time others knew it too. Somewhere within, we all have a little bit of Capt. Karan Shergill of LAKSHYA, willing to give our irrelevant existence a mission, at least when it is our country at stake. Yes, nothing gives us more joy that watching our flag unfurl upon this world. Indian and proud, indeed!

HomeCmcmBollywood films which showcased an understated love for India