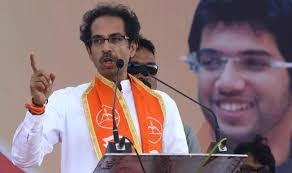 Mumbai: In an oblique reference to the central government’s Smart City scheme, over which the ruling allies Shiv Sena and the BJP are at logger heads, and terming the article penned by state BJP spokesperson Madhav Bhandari in state BJP publication ‘Manogat’ as revelations of the mentally ill, the Saamana editorial on Monday advised the BJP Govt to set up 10 mental hospitals in Smart Cities to be able to treat such mentally ill workers.

It may be noted that city BJP president Ashish Shelar, in a veiled attack at the Shiv Sena on Sunday had said that the BJP workers too have right to agitate and protect respect of their leaders. Shelar was quick to react on Monday also.

He chose the part of the editorial that presided Prime Minister Narendra Modi and Chief Minister Devendra Fadnavis for the good work they have done and remarked “well good, we feel that the Saamana should always like this stand firmly behind Prime Minister in his nation building and corruption free work of Chief Minister”.

However, by late evening, the war of words between the two ruling alliance partners spilled out into the open. In Borivali at Bhagwati Hospital LokSabha MP from Mumbai North GopalShetty was left waiting as local Sena corporator Dr Shubha Raul and SheetalMhatre went ahead and inaugurated the Out Patient Department (OPD) which led to cadres from both the sides raising slogans against each other. In Nanded too, Sena workers clashed with BJP workers as the latter tried to burn the effigy of Sena leader and RajyaSabha MP Sanjay Raut.

Referring to the veiled warning issued by the BJP that its cadres too were quite capable of burning Saamana copies, the editorial stated that this amounted to like setting the ideology of the RSS and Prime Minister Narendra Modi’s basic ideas. The Saamana editorial remarked that everybody has the right to criticize but those trying to speak the truth their voices are being stifled from Delhi to Maharashtra. Without naming the BJP it said that their politics is based on spreading falsehood and rumours. It argued that spreading falsehood was a crime.