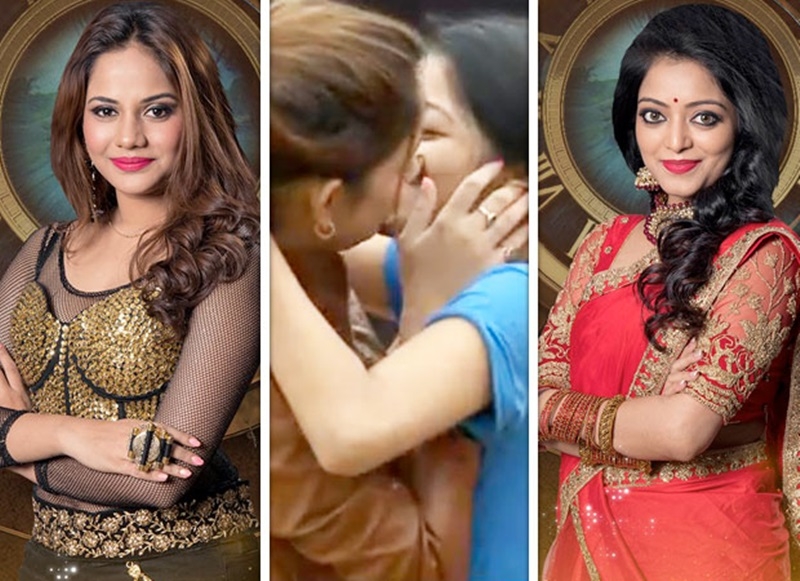 This weekend saw many interesting twists and turns in the second season of Bigg Boss Tamil. Starting with interesting tasks like playing twins, wearing diapers and behaving like kids, turning men, the Bigg Boss episode saw selective contestants playing varied characters. But everyone was caught by a surprise when Aishwarya Dutta and Janani made it bolder with their liplock in the sixth episode of Bigg Boss Tamil 2.

Well, Bigg Boss season 2 which is still in its first week, already created a furor during its first weekend. The episode that aired on June 23 saw one of the boldest moves in Bigg Boss Tamil. Two women, namely, Aishwarya Dutta and Janani shed all inhibitions when they locked lips in the midst of other contestants. A similar episode was seen in the first Bigg Boss when Oviya [also the winner of season 1] locked lips with Aarav. While this case is different, it all came together as a part of the task. The task was for Janani and Vaishnavi who had to dress up and act like men in that episode. Coming to what happened, during one of the activities, as the housemates gathered to have some fun. That’s when Aishwarya asked Janani to kiss her. After a short banter between the two, Aishwarya goes on to add that Janani will have to kiss her on the lips. Janani advanced to do the same and the kiss left many in the house shocked. The video of their kiss, not surprisingly, has gained a lot of momentum, especially on social media.

In fact, it seems that the video also invited a lot of detractors on social media too. The actresses, we hear, were even trolled for their kiss act on the show. Despite all the hoopla, this episode managed to grab attention and increase curiosity. Furthermore, it came as a surprise to many because a love story was being developed between Aishwarya and another contestant Shariq Hassan. In fact, Shariq in one of the recent episodes confessed that he really likes Aishwarya. With so much drama ensuing in the first week itself, let’s see what the future episodes hold.

As for the Weekend Episodes of Bigg Boss, we saw our superstar Kamal Haasan grilling the contestants on their activities. The host also called out to Mumtaz, Ananth, Riythvika, Nithya  as nominations for the eviction. After much suspense around it, however, Kamal revealed that no eliminations are happening in this week. Since this is the first week, the channel and the makers of the show decided to give contestants some more time to interact with each other. And also, so that the audiences get to know more about the participants on the show!