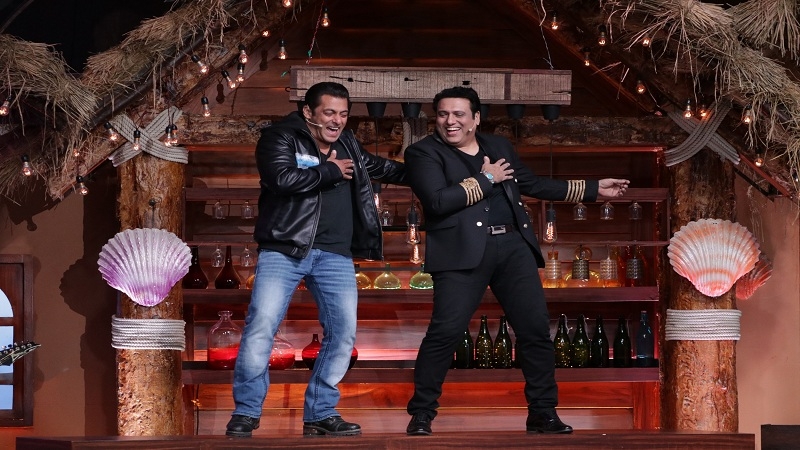 The weekend is here and the anxiety holds strong. Who will be evicted this weekend? Which nominated contestant will be safe? The questions are never ending. A week that witnessed a range of emotions – from anger to new found friendships from love to even a break up has finally ended. Keeping in mind the tensed atmosphere and a rather hostile environment within the host Salman Khan had a twist planned and a special guest invited to lighten the mood.

Megastar Salman Khan was joined by his favourite Partner Govinda. The duo were seen living a life of contestants for a day. Bigg Boss woke them up to the popular song ‘Do You Wanna Partner’. Elated to have his close friend on the show, Salman Khan was seen preparing breakfast for Govinda, a rather unusual site. Both of them, even nominated jodis from Bollywood, a fun take on how and who they’d like to nominate for various reasons.

Later Salman and Govinda entered the grand stage with the Bigg Band playing their popular song ‘Soni De Nakhre’. Salman also got Govinda to interact with the housemates through the interactive TV. Being at his hilarious best, Govinda got them to play the ‘Salesman’ game for which each housemate was deemed as a product and the others had to sell them adding their own creativity to ensure they please the buyers. Adding more fun to the game, Govinda gets Shivashish and Sreesanth to mouth his famous dialogues. They impeccably tried to replicate it but couldn’t match up to the superstar thus leaving everyone in splits.

Salman and Govinda’s coming together was definitely the most sought after and their union on Bigg boss 12 was the highlight of this weekend ka war. A guessing game between the superstars eventually had them grooving to songs like – ‘ I am a Disco Dancer’, ‘Aapke aa jane se’ etc. After spending some great time together, Govinda made an exit and Salman Khan took to his regular act of being the disciplinarian for the contestants and reprimanding them for their behaviour patterns throughout the week.

Who will face the wrath of this Weekend Ka Vaar and who will be nominated for the torture chamber? Don’t forget to watch Appy Fizz presents Bigg Boss 12 powered by Oppo F9 Pro tonight at 9 pm only on COLORS.