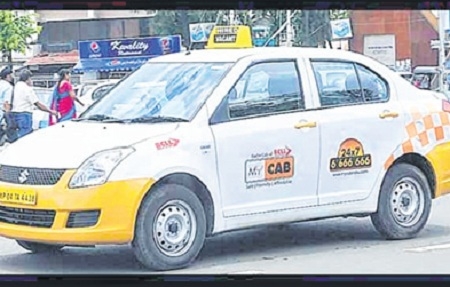 A promotion package of the BJP’s Samriddha Madhya Pradesh campaign being telecast on the TV Channel has raked the forgotten radio cabs of Bhopal City Link Limited (BCCL). The TV ad shows an auto-rickshaw driver sharing his idea with the passengers that if government operates transport services, then maximum money will go to operators instead of hefty premium grabbed by the private companies.

This takes us back to the radio cabs, which were launched in the state capital in 2014. It is alleged that the Bhopal Municipal Corporation (BMC) had killed its Radio cabs (Swift Desire). These taxis became victim to alleged mismanagement and could not compete with the private- app based- cab services like Ola and Uber. The then UAD Minister Kailash Vijayvargiya had launched 100 Swift Desire in 2014 in Bhopal with much fanfare, to provide better city transport services.
BCLL had started this project to operate and manage 100 radio cabs in Bhopal city through a private operator on a monthly premium (Rs 2,000) per radio cab. The cost of air-conditioned radio cab (Swift Desire) was Rs 50 for the first two km and Rs 23 per km thereafter. The contract was for a period of five years.

BCLL’s senior officials Sanjay Soni said, “BCLL could not manage the radio cabs as private players like application based cab aggregators (ABCA) provided the same transport service at competitive rates in the market.”
He said, “Ours was a radio cab on call in which the passenger were charged from the point where they boarded the cab.Other features were: passenger got a printed receipt, a GPS based navigator, the drivers had no scope even to cheat first time visitors to the city . So, its features justified the fare. But private players outplayed BMC’s radio taxis.”