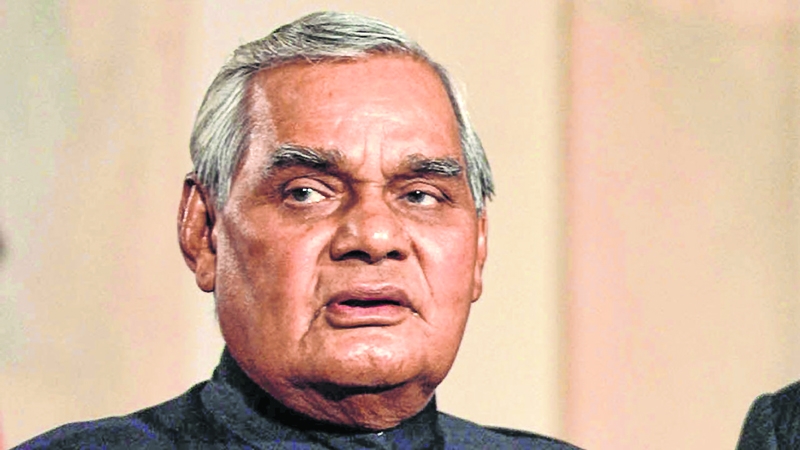 Atal Bihari Vajpayee‘s activism started with the youth wing of Arya Samaj, of which he was the general secretary in 1944. He joined the RSS in 1939. He had a chequered career in Indian politics. He was a member of the Parliament, having been elected to Lok Sabha over ten times and to Rajya Sabha twice.  Pandit Nehru, impressed by his oratorical skills and the force of argument, said that he would one day become the Prime Minister of India.  Vajpayee was one of the founding members of the erstwhile Bharatiya Jana Sangh, which he headed for two terms –1968 -72.

When the Congress Party was defeated at the General Election in 1977, and the Janata Government was formed, Vajpayee became the External Affairs Minister in Morarji Desai’s Government. On Indira Gandhi liberating Bangla Desh in 1971 war, an emotionally charged Vajpayee called her ‘Goddess Durga’ in Lok Sabha.  After the Janata Government collapsed, he had founded the Bharatiya Janata Party with his colleagues LK Advani and Bhairon Singh Shehawat in 1980.

Vajpayee  had served thrice  as the Prime Minister , first for a term of 13 days in 1996,   a brief period from 1998 to 1999, and then for a full term from 1999 to 2004.  He was the first Indian prime minister, outside the Congress Party, to have completed a full five-year term in office. The then President Shankar Dayal Sharma had sworn him as the 10th Prime Minister, but  when he failed to muster enough support from other parties to obtain a majority,  he had gracefully  resigned.

After the fall of the two United Front governments between 1996 and 1998, the Lok Sabha was dissolved and fresh elections were held. The 1998 general elections again put the BJP ahead of others. This time, a cohesive bloc of political parties joined the BJP to form the NDA, and Vajpayee was sworn in as the Prime Minister. The NDA proved its majority in the parliament. The government lasted 13 months until mid-1999 when the AIADMK withdrew its support to the government. The government lost the ensuing vote of confidence motion in the Lok Sabha by a single vote on 17 April 1999. As the Opposition was unable to come up with the numbers to form the new government, the Lok Sabha was again dissolved and fresh elections were held, Vajpayee remaining the Prime Minister until the elections were held.

In 2002, Hindu-Muslim violence in Gujarat had killed more than 1,000 people. Vajpayee condemned the violence and reminded the Chief Minister Narendra Modi of “Raj Dharm” – of protecting all the segments of people.  He was referred as the Bhishma Pitamah of Indian politics – a person in the epic Mahabharata held in high esteem by the two warring sides – by Manmohan Singh. He was conferred India’s highest civilian honor, the Bharat Ratna in 2014. He retired form active politics in 2009 due to health concerns.

In his demise the nation has lost a towering personality in Indian politics. He was held in high esteem by political leaders cutting across party affiliations for providing an all inclusive government.  He never allowed his ideological moorings in the RSS to color his judgment. He treated the opposition with respect.  He often consulted the rival political leaders on the issues concerning the nation.  At a time when the country is polarized on communal lines, and fear psychosis griping the nation on account of mob lynching with impunity, there is much to learn for the present political dispensation from him.

The writer is a Professor of Political Science and retired Principal, who published his magnum opus The Trial by Fire: Memoirs of a College Principal Vajpayee to achha hai par party theek nahin