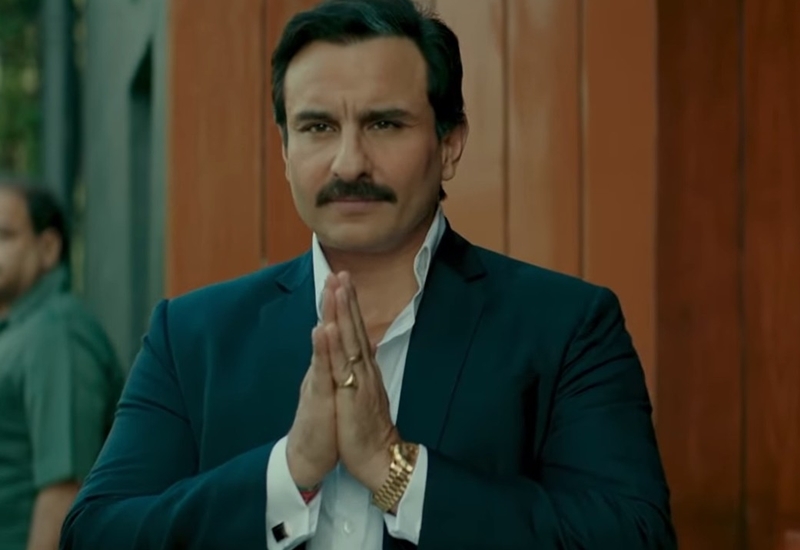 ‘Baazaar’ attempts a ‘Wolf of Wall Street’ bull run in our desi Gujarati moneybags stronghold ‘Dalal Street’ without the finesse or the fangs and it shows. A tale of greed with small portions of love thrown in to keep the romance fed audience inured, ‘Baazaar’ basically is a showcase for Saif Ali Khan who is incisively sharp with his piercing gaze and pungent comments. The film’s oft-repeated tagline ostensible states its intentions loud and clear “Bada aadmi Bannne ke liye, line cross karni padti hai. ‘Baazaar’ is subject to market risk.” So you know right from the outset where this film is going to take you. It’s an interesting frame of reference for a mainstream Bollywood film, but there’s not enough meat here to rouse your passions.

The screenplay by Pankaj Advani, Aseem Arora and Parveez Sheikh, shadows the moral corruption of a naïve, bright-eyed, Allahabad boy, Rizwan Ahmed (Rohan Mehra) aided by Dalal Street’s Gekko, Shakun Kothari (Saif Ali Khan) the king of the stock market, who believes in risking big to win bigger. Going by the Hollywood template Rizwan wasn’t meant to go all the way and sure enough, he puts his foot down. But by then there’s little to differentiate between the wolves and the so-called lambs.

Saif’s Shakun lives it up at every level and it’s quite a performance, but the severe intransigence in the moral by-play hampers it’s effect to a great extent. While Shakun’s character is vividly detailed, that of the parallel hero, the moral counter-point, is a little too vapid to curry favour. The drama surrounding Shakun’s angadiya beginnings and his eventual rise to the top is intimately interesting, but there’s little to define the vapid young Rizwan’s character other than to show him as willingly corruptible, unconvincingly pivoting to a moralistic stand-off. It’s not a very believable construct especially since we have seen and experienced so much large-scale corruption in India that this sort of hyphenated infarctions seems immature and nothing worth risking life and career over.

The near 140-minute narrative gets a little too heavy duty in its assay with multiple narrative media vying for your attention and nothing really managing to register. The voiceover, the music score, the punctuated dialogues, the buzz of the trading floor – tend to overcompensate, shrouding out the main theme of human corruptibility and innate goodness coming through against all odds. The half-baked writing and the rushed treatment deserve equal blame for this. While the film has been edited quite slickly with sumptuous camera work and assiduously apt production design by Shruti Gupte, the hyper-ventilating background score and Director Gauravv K Chawla’s attempts to make more of it than the sum of its parts – makes it less than thrilling. Careful performances by Saif, Radhika, Rohan and Chitrangada lend some weight even though the film doesn’t quite rise up to the expectation of a striking morality humdinger!