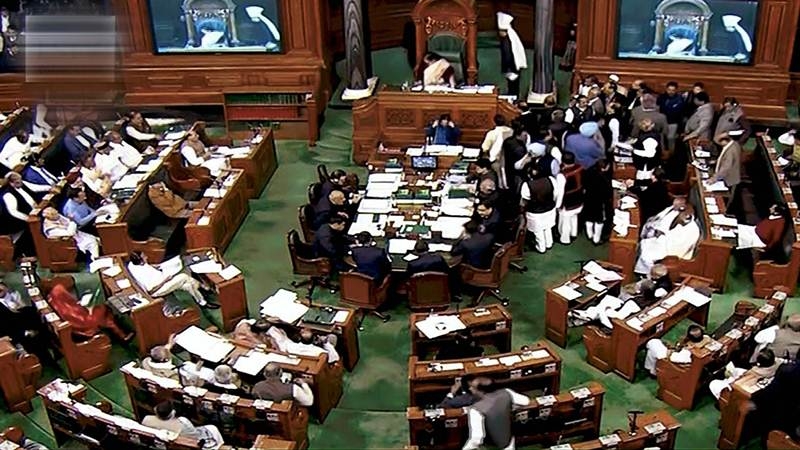 New Delhi: Parliament was adjourned for the day on Thursday after the Lok Sabha managed to pass two bills and Rajya Sabha failing to transact any business amid uproar by the Opposition over various issues in both Houses. Both Houses have been witnessing a ruckus over the Rafale fighter jet deal and Cauvery river issue, among other matters.

The two bills which were passed by Lok Sabha were – the Consumer Protection Bill, 2018 and the National Trust for Welfare of Persons with Autism, Cerebral Palsy, Mental Retardation and Multiple Disabilities (Amendment) Bill, 2018. In the Rajya Sabha, slogan-shouting members of Tamil parties – AIADMK and DMK – trooped into the well of the House over the Cauvery issue as soon as the House met for the day.

Opposition Congress members also shouted slogans and held placards seeking a probe by the Joint Parliamentary Committee (JPC) into the purchase of Rafale jets from France. Sensing the mood of opposition Rajya Sabha Chairman M Venkaiah Naidu adjourned the House for the day minutes after it assembled.

In the Lok Sabha, the proceedings were adjourned in the morning amid sparring between members from Tamil Nadu and Karnataka over the issue of proposal to build a dam on the Cauvery River. While members from Congress demanded a Joint Parliamentary Committee (JPC) probe into the Rafale deal, Tamil Nadu and Karnataka entered the well holding placards over the Cauvery issue.

However, the lower house managed to pass two bills. The discussion listed in the Lok Sabha on Thursday on the new Triple Talaq Bill was put off to December 27 after the Christmas holidays at the instance of Congress group leader Mallikarjun Kharge on his most unusual “commitment” to the Speaker on behalf of the Opposition to be ready to discuss it that day.

Kharge’s intervention came just as the Speaker called for taking up the Bill, together with a statutory resolution disapproving the related Ordinance issued on September 19. Parliamentary Affairs Minister Narendra Singh Tomar jumped to his feet to accept when the senior leader like Kharge gives his commitment to the Chair. He wanted the Bill taken up on priority.

Law Minister Ravi Shankar Prasad, who was to press for consideration the Muslim Women (Protection of Rights on Marriage Bill, 2018, however, sought a better commitment from Kharge that the Bill will be debated peacefully and passed in peace “since the entire country, or rather the entire world, is watching us.” Kharge responded: “Give us sufficient time to put across our views for changes to let the Bill be most effective.”