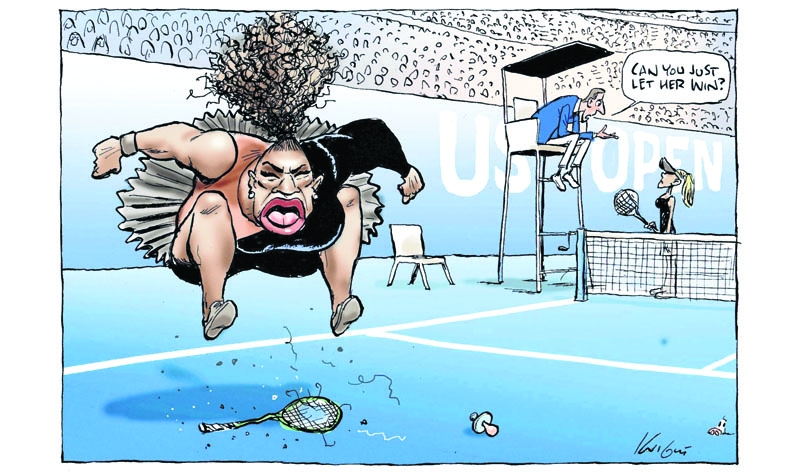 UNDATED; This Mark Knight's cartoon published by the Herald Sun depicts Serena Williams as an irate, hulking, big-mouthed black woman jumping up and down on a broken racket. The umpire was shown telling a blond, slender woman Äî meant to be Naomi Osaka, who is actually Japanese and Haitian Äî "Can you just let her win?"AP/PTI(AP9_11_2018_000118B) |

London : Harry Potter author JK Rowling has joined several celebrities in criticising an Australian cartoonist for his “racist and sexist” caricature of tennis superstar Serena Williams at the US Open.

Mark Knight’s cartoon, which appeared in Australian newspaper Herald Sun, depicted the 23-time Grand Slam champion stomping on her smashed racket as a dummy lay on the court after she lost the final to her Japanese opponent Naomi Osaka.

Osaka is pictured as white and blonde despite her Japanese and Haitian heritage. Osaka is seen reasoning politely with the umpire Carlos Ramos who asks, “can you just let her win?” “Well done on reducing one of the greatest sportswomen alive to racist and sexist tropes and turning a second great sportswoman into a faceless prop,” Rowling tweeted.

The cartoon has been blasted by numerous athletes, celebrities, journalists and activists. The National Association of Black Journalists said the cartoon was “repugnant” on many levels.

\“The September 10 cartoon not only exudes racist, sexist caricatures of both women, but Williams’ depiction is unnecessarily sambo-like,” it said.

Bernice King, the chief executive of the King Center and daughter of Martin Luther King Jr, said the newspaper’s stance was “unfortunate”. Speaking on ABC News, Knight defended the cartoon, saying “I’m upset that people are offended, but I’m not going to take the cartoon down”.

During final, Williams smashed her racquet and called chair umpire Ramos a “thief” and a “liar”. She was later fined USD 17,000, stirring the tennis world and triggering a debate about double standards towards men and women in the sport.

Even if guys do it, it’s wrong: Martina

Martina Navratilova, an 18-time Grand Slam singles champion, says Williams was wrong in her outburst at the US Open final even though she agreed there is a double standard.

Writing in an opinion article for the New York Times, the 61-year-old Czech-born American said a higher standard needed to be observed when Williams called chair umpire Carlos Ramos a “thief” and was penalized a key game in the second set. “We cannot measure ourselves by what we think we should also be able to get away with,” Navratilova wrote.

“In fact, this is the sort of behavior that no one should be engaging in on the court.”