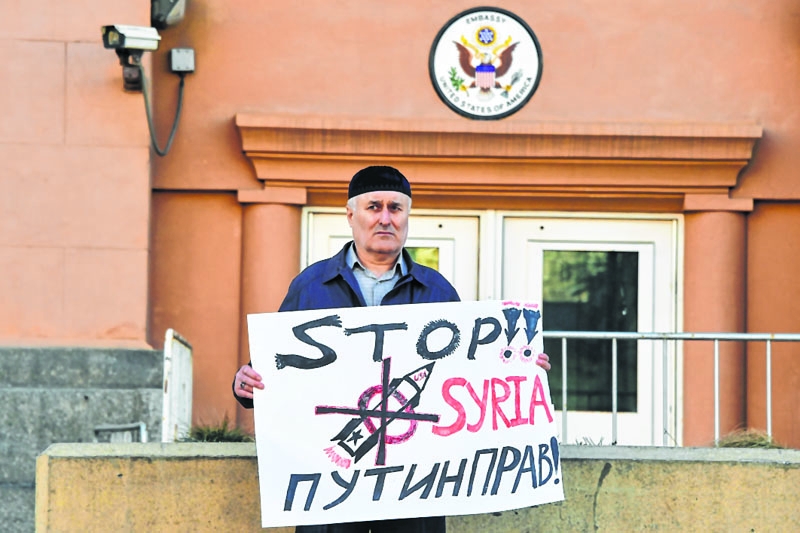 TOPSHOT - A man holds a banner supporting Syria and read as "Putin is right!" in front of US embassy in central Moscow on April 14, 2018. The UN Security Council will meet on April 14 at Russia's request to discuss air strikes launched by the United States, France and Britain on Moscow-allied Syria in response to a suspected chemical weapons attack. / AFP PHOTO / Vasily MAXIMOV |

Moscow : Russian President Vladimir Putin has denounced a strike on Syria launched by the United States and its allies as an “act of aggression” that will exacerbate humanitarian catastrophe in Syria.

In a statement issued by the Kremlin, the Russian leader says Moscow is calling an emergency meeting of the United Nations’ Security Council over the strike launched by the US, Britain and France.Putin added that the strike had a “destructive influence on the entire system of international relations.”

He reaffirmed Russia’s view that a purported chemical attack in the Syrian town of Douma that prompted the strike was a fake.Putin said that Russian military experts who inspected Douma found no trace of the attack. He criticised the US and its allies for launching the strike without waiting for inspectors from the international chemical weapons watchdog to visit the area, re    ports AP.Israel says in response to the American-led strike in Syria that the Middle Eastern country’s “murderous actions” put itself in danger.

An official says in a statement on Saturday that President Donald Trump made clear last year that the use of chemical weapons was a red line not to be crossed.

He says the overnight operation carried out by the United States, France and Britain followed that example.

The official says that “Syria continues to carry out murderous actions and be a base for these actions and others, including Iran’s, that put its territory, forces and leadership in peril.” The official spoke anonymously according to protocol.

Damascus : Syrian President Bashar al-Assad said Western strikes on government military installations today only made him more keen to fight back against his opponents, in comments published by his office.

“This aggression will only make Syria and its people more determined to keep fighting and crushing terrorism in every inch of the country,” Assad, in his first reaction to the strikes, told his Iranian counterpart Hassan Rouhani.