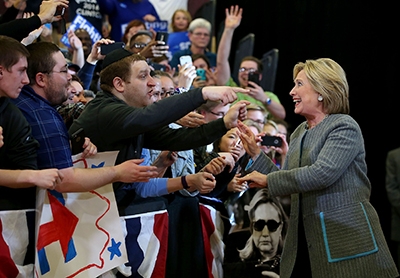 DES MOINES, IA - JANUARY 31: Democratic presidential candidate, former Secretary of State Hillary Clinton greets supporters during a "get out to caucus" event at Abraham Lincoln High School on January 31, 2016 in Des Moines, Iowa. With one day to go before the Iowa caucuses, Hillary Clinton continues to campaign throughout Iowa. Justin Sullivan/Getty Images/AFP == FOR NEWSPAPERS, INTERNET, TELCOS & TELEVISION USE ONLY == |

The US Presidential hopefuls will soon learn whether the time, effort & money they poured into campaigns have been rewarded or not

Washington : US presidential aspirants are making a final push before Monday’s first nominating contest in Iowa where Donald Trump leads the Republican side while Bernie Sanders poses a top challenge to Hillary Clinton among Democrats.

The former secretary of state Clinton, clinging to a narrow 45 to 42 percent lead over Sanders, spent much of Sunday in western Iowa with her daughter, Chelsea, before heading back to Des Moines, Iowa, for a rally with former president Bill Clinton.

In an apparent jab at Sanders, who has drawn huge crowds with his attacks on the Wall Street and the rich, Bill Clinton decried politicians who did little more than voice the frustration of voters.

As he rallied in Waterloo, Sanders complained he could not keep up with distortions of his record by the Clinton camp which has taken ads suggesting he is attacking Planned Parenthood and protecting the interests of the National Rifle Association.

“I think the excitement and the energy is with our campaign,” said the  Vermont senator who is maintaining a wide lead over Clinton in New Hampshire which holds the first in the nation primary on Feb 9.

On the Republican side, poised for a stunning win in Monday night caucuses, Trump who in latest polls leads his nearest Republican rival Ted Cruz by five points (28-23 percent) called him a “liar” as he made his final pitch in the heart of evangelical Iowa.

He announced that Sarah Palin will again join him Monday for a final get-out-the-vote effort and in an interview with ABC News Trump bragged about “how well I’m doing with evangelicals.” Texas Senator Cruz questioned his rival’s conservative authenticity on abortion and religious liberty and appeared alongside Duck Dynasty’s Phil Robertson, who branded same sex marriage “wicked” and “evil.”

Meanwhile according to a new CNN/WMUR poll conducted by the University of New Hampshire Survey Centre, Trump backed by 30 percent likely Republican primary voters continues to hold more than double the support over Cruz (12 percent) in New Hampshire.

In the Democratic race, Sanders continues to lead Hillary Clinton by a wide margin, 57 percent to 34 percent in the new poll.

Sanders holds an edge across nearly all demographic groups measured in the poll, though Clinton fares better among women than men, and she splits voters age 65 or older with Sanders about evenly, while trailing Sanders by a significant margin among younger voters.         —IANS