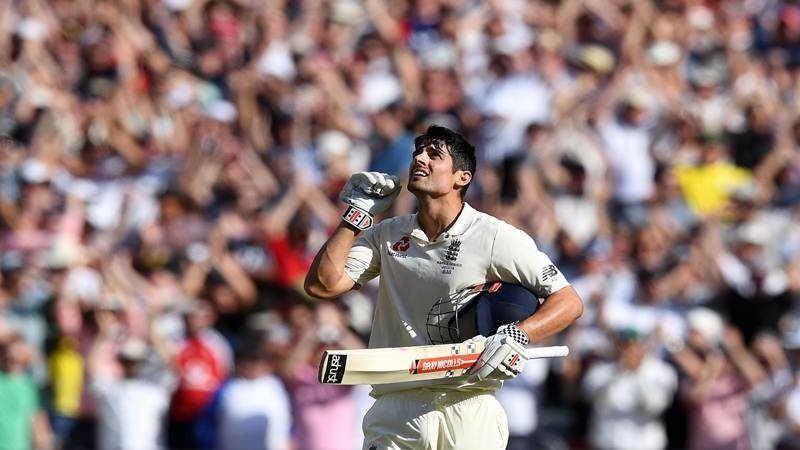 England's batsman Alastair Cook celebrates scoring his century against Australia on the second day of the fourth Ashes cricket Test match at the MCG in Melbourne on December 27, 2017. / AFP PHOTO / William WEST |

Melbourne: Alastair Cook hit a long-awaited century and Stuart Broad snapped up four wickets as England’s much-maligned old guard finally enjoyed a day to remember in the Ashes series on Wednesday. At 3-0 down after three Tests, the Ashes urn is already lost to Australia but Cook and Broad showed their careers are not over yet after critics had questioned their place in the England team.

In scorching heat in Melbourne, England bowled out the Australians for 327, with 113-Test paceman Broad capturing four wickets for 51 runs in his best bowling performance in more than a year. Cook then ended a 10-innings stretch without a half-century, the longest drought of his 151-Test career, to claim his 32nd Test ton.    At the close, England were 192 for two and trailing by 135 runs with Cook, playing in an English-record 34thconsecutive Ashes Test, unbeaten on 104 and skipper Joe Root providing support on 49 in a 112-run partnership.

Cook had a huge and symbolic let-off on 66 when rival skipper Steve Smith put down a two-handed chance after a couple of grabs at the ball in the slips off Mitchell Marsh. But apart from the drop, it was more like the former captain’s signature batting after just 83 runs in his previous six innings of the series.

The Australians claimed two wickets with JoshHazlewood trapping James Vince leg before wicket for 17 and Mark Stoneman out to a blinding one-handed return catch by spinner Nathan Lyon for 15. Australia, already without the injured Mitchell Starc, had enforcer Pat Cummins on and off the field with a stomach complaint and down on pace and trademark bounce.

England earlier ended Steve Smith’s incredible three-year unbeaten run in Melbourne as they bowled out the hosts for 327 just after lunch, claiming the last seven wickets for67 runs. Debutant Tom Curran celebrated his first Test wicket as Smith chopped a short, wide delivery on to his stumps on76, early on the second day. Smith had not been dismissed in a Melbourne Test match since Boxing Day 2014 and was on track for his third century of the series on a bat-friendly MCG pitch.

In the last three Boxing Day Tests, Smith scored 192against India, 134 not out against the West Indies and an unbeaten 165 last year against Pakistan. With his dismissal, Smith has now scored 502 runs in the Ashes series at a stunning average of 125.50. It was an overdue slice of luck for Curran, who had David Warner caught on 99 only to have the dismissal overturned for an overstepping no-ball on Tuesday’s opening day. Warner went on to score 103.

England got more return for bowling wide of the stumps when Mitchell Marsh also dragged on a Chris Woakes delivery for nine after his 181 in the third Test in Perth.    His elder brother, Shaun, lost a leg before wicket review on 61 off 148 balls to Stuart Broad. Tim Paine became the third batsman to chop on to his stumps in the session for 24 off James Anderson, while JacksonBird fell lbw to Broad for four. Cummins was snapped up at slip off Broad for four before Lyon was lbw to Anderson for a duck to end the Australian innings.