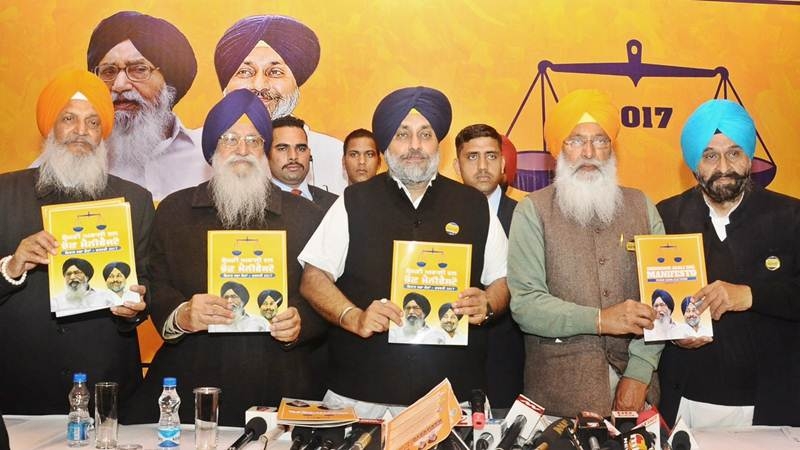 Chandigarh: Only SAD-BJP government can protect Punjab waters while the hawkish stance of Amarinder-led Congress and the AAP’s confrontationist approach towards Centre would certainly lead to complete chaos in the state, Akalis said here today.

SAD secretary general and former union minister Sukhdev Singh Dhindsa and SAD spokesman Balwinder Singh Bhunder said that for protection of Punjab waters, Punjab government is expected to deftly deal the contentious issue by keeping the Union government on its side.

They said each vote to Congress or AAP in the assembly elections would strengthen the hands of Anti-Punjab forces.

Amarinder had ditched Punjab by siding with late Prime Minister Indira Gandhi in support of construction of contentious SYL canal while AAP supremo Kejriwal has already submitted an affidavit through his government justifying release of extra water to Haryana and Delhi, they said.

The Akali duo said that Apex Court has already ordered construction of SYL. However, the Modi government would evolve a path that would resolve the contentious issue without compromising Punjab’s interest.

In such a sensitive situation, the hawkish stance of Amarinder or Navjot Singh Sidhu-led Congress and the confrontationist approach of AAP would certainly lead to complete chaos wherein the union government would be force to remain neutral, they said.

The Akali leaders claimed the Congress stands totally decimated in the entire country and it could stoop to any level for its survival and can make any compromises and surrendering Punjab’s water interests is not a big deal for it.

On the other hand, “Arvind Kejriwal is keen to hop from one state to other by having total confrontation not only with Modi government at Centre but with all the democratic institutions – – be it Election Commission, Lt Governor in Delhi or judiciary too,” they said.

Being an “anarchist”, Kejriwal would love to take “panga” (fight) with every institution to denigrate it and squander all hopes of Punjab for a favourable settlement, they said.

The Akali duo averred that it was not the right time to hand over the reign of Punjab to AAP or Congress individually or collectively as both the parties have planned to join handspost poll to share the spoils of office.