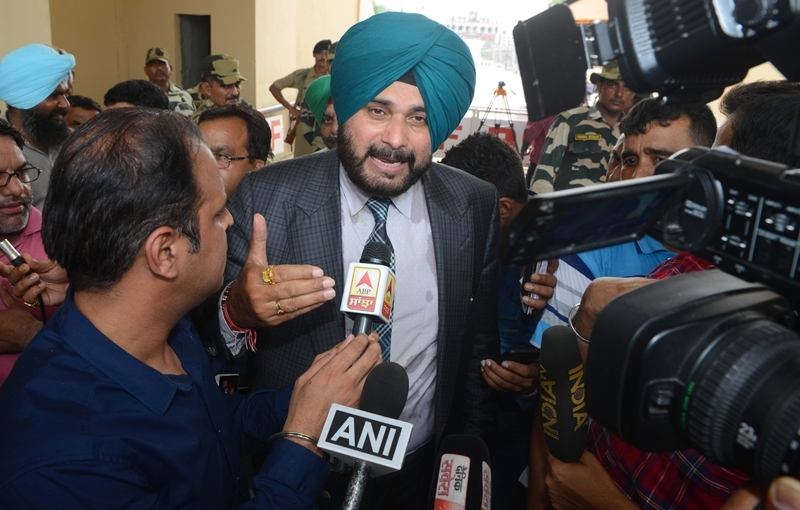 Amritsar (Punjab): Punjab’s Local Government Minister Navjot Singh Sidhu on Monday pointed out loopholes into the October 19 train accident while accusing the Indian Railways and the central government responsible for the tragedy.

Sidhu told ANI, “Why and how was the driver given a clean chit within six hours? Why has his name not been revealed as yet? The place where the incident took place belongs to the Centre, the tracks, railway engine, police and guards are also under the jurisdiction of the central government and it is the Centre which has lodged the FIR also.” His wife, Navjot Kaur Sidhu, was a chief guest at the event where the incident took place. Clarifying his stance on the matter, he said: “Yes, she was the chief guest there. She had many events lined up on that day. This was the fourth one and she had to leave for another event following this. As soon as the effigy was burnt, she left. She was on her way to another event when she came to know about the incident and she wanted to return to the spot but the police commissioner asked her not to as the incident had already taken place. That is why she went to the hospital.”

The minister accused the Indian Railways of negligence. He said, “One eyewitness told me that the light of the train was not working, if that is the case then how was the train allowed to go on track? If that is not the case then the light of the train gives a vision of three kilometers. More than 500 people were present there and were taking pictures, obviously there was light from their phones and an LED light was also there. How did no one see that? What was the guard doing?” Sidhu also claimed that the Ravana effigy burning has been happening at that particular place for the past 50 years and 21 Ravanas were burnt in Punjab along the railway line.

Further sharpening his attack, he said: “Ravana effigy is not installed in a few seconds. Why did no one raise an objection then? Out of the 21 places, I can tell you more than 18 would not have had permission. Does the Railways have no responsibility?” “Loss of life is irreparable. I urge those doing politics over dead bodies to stop. No compensation can bring a lost life,” said Sidhu. The accident took place in Choura Bazar near Jhoda Phatak area of Amritsar after a train ran over the crowd, standing along railway tracks, to watch an effigy of Ravan being burnt. In the incident 59 people dead while 57 sustained injuries in the tragedy.