Amnesty says its employees did not raise anti-India slogans 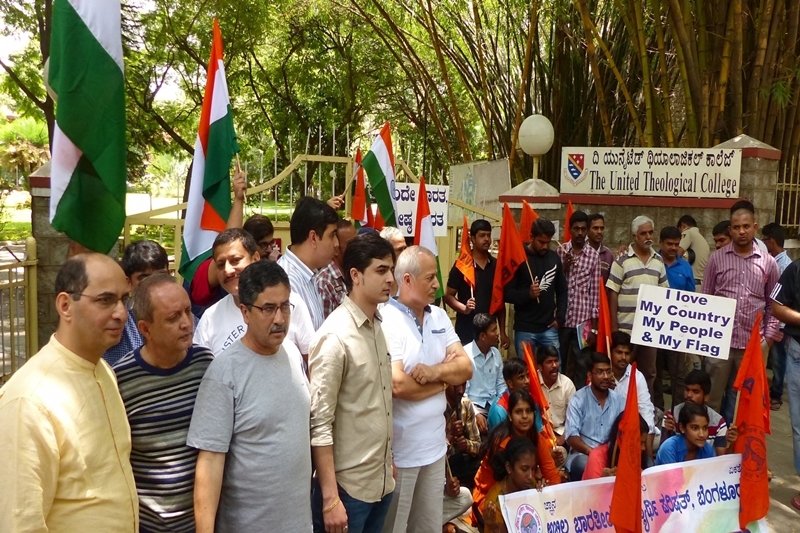 Bengaluru: ABVP activists stage a demonstration outside the United Theological College to protest against an event organised by Amnesty International India to draw attention to alleged human rightsâ violations in Kashmir in Bengaluru, on Aug 14, 2016. (Photo: IANS) |

Bengaluru: Amnesty International’s India chapter today said none of its employee had shouted any anti-India slogan at an event on Kashmir in Bangaluru, allegations based on which sedition charges were slapped against the human rights body.

Amensty India said allegations mentioned in a complaint by an ABVP representative against it were “without substance” and that only discussion at the event on Saturday was about allegations of human rights violations and denial of justice in Jammu and Kashmir.

Local police had slapped sedition charges against Amnesty International India yesterday following allegations that anti-India slogans were raised at the event, organised by it, during a discussion on Kashmir issue.

“No Amnesty International India employee shouted any slogans at any point,” the human rights organisation said in a statement referring to allegations that “slogans were raised that Indian Kashmir should be part of Pakistan.”

To charges that the event indirectly supported terrorists, Amnesty said the only discussion that had taken place was about allegations of human rights violations and the denial of justice to families in Kashmir.

“These are issues that have regularly been discussed in the media. They have been written about at length by members of Parliament, politicians, judges and civil society,”it said.

The event was held as part of a campaign based on the report “Denied: Failures in accountability for human rights violations by security force personnel in Jammu and Kashmir”, published in July 2015, it said.

Amnesty said the report was based on in-depth research in Jammu and Kashmir, including interviews with family members of “victims”, RTI applications, examination of police and court records, and interviews with civil society groups, lawyers, and government officials.

The families of three Kashmiri victims that were interviewed for the report were invited to share their stories at the event, said Amnesty.

About allegations that some people at the event tried to assault ABVP activists, it said, “No Amnesty International India employee was involved in any form of assault.”

“Towards the end of the event, some of those who attended raised slogans, some of which referred to calls for ‘Azaadi’ (freedom). Amnesty International India as a matter of policy does not take any position in favour of or against demands for self-determination.

About allegations that Sindhujaa Iyengar, an Amnesty employee, and two others raised raised anti-national slogans, it said Iyengar was not present on stage at any point during the event.

Amnesty said footage of the event has been shared with the police.

The rights body said Amnesty has worked extensively on human rights violations in Pakistan, including “the enforced disappearances and unlawful killings of political activists in Balochistan, violations by security forces in the Federally Administered Tribal Areas (FATA), and violence against journalists by groups including the ISI”.