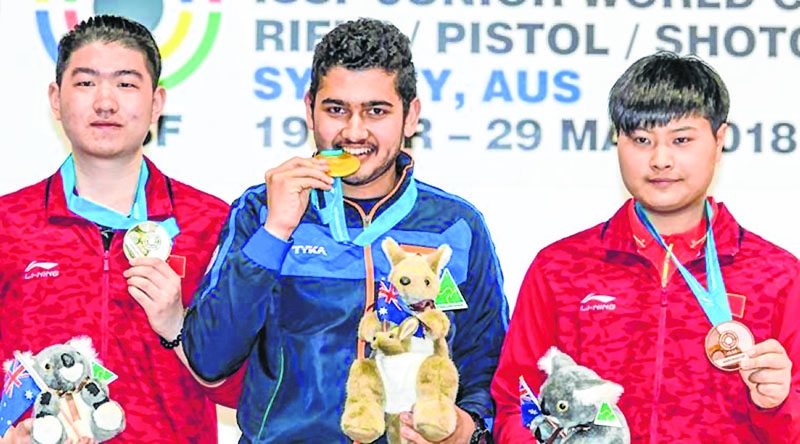 Having qualified for the final with the highest score, Bhanwala prevailed over two of his India teammates — Anhad Jawanda and Rajkanwar Singh Sandhu — and three Chinese participants in the medal round.

India are now placed second in the overall standings with 15 medals — comprising six gold, three silver and six bronze — behind China and ahead of top shooting nations such as Italy and hosts Australia.

Anish, who was placed seventh in this event at the ISSF World Cup Stage 1 in Guadalajara, Mexico earlier this month, led the match since its very first stage, as he was the only shooter able to nail a perfect 5-hit series during the whole final.

Indeed, after recording the highest qualification score with 585 points, Anish concluded with 29 total hits, pocketing the first international gold medal of his career in this event.

Two Chinese shooters placed alongside him on the rapid fire pistol podium — 19-year-old Cheng Zhipeng took silver with 27 hits, adding it to the bronze he won at last year’s ISSF Junior World Championship in Suhl, Germany, while Zhang Jueming (20) finished with 23 and claimed bronze in his first Junior World Cup start ever.

Appearing in his second final at the ISSF Junior World Cup, Jawanda finished just outside the medal positions, finishing fourth with 17 hits and improving from the seventh position he obtained two days ago in the air pistol event.

Jawanda was followed by the third Chinese final participant – 19-year-old Pan Junchen – who scored 12 hits and took the fifth place in his first Junior World Cup start ever.

Eliminated after four series, India’s 15-year-old Rajkanwar Singh Sandhu signed off with 7 and was placed sixth in the first international appearance of his career.