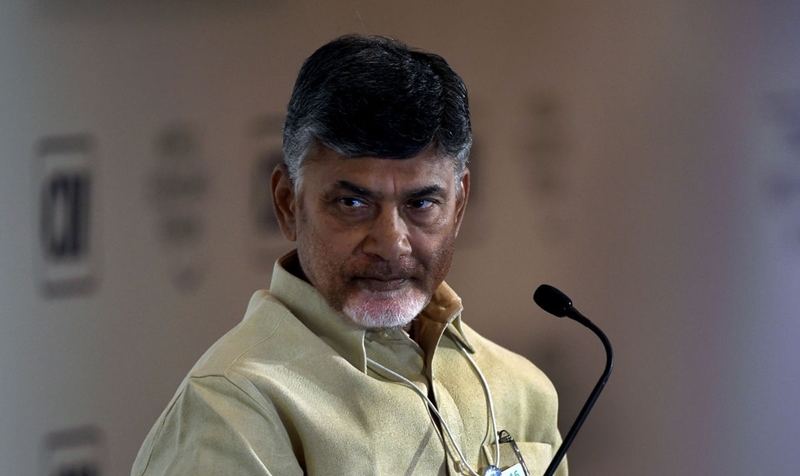 Maravati: Justifying his party’s alliance with Congress,TDP supremo N Chandrababu Naidu Saturday claimed it was a ‘democratic compulsion’ due to ‘historic reasons’ and was done after TRS spurned his offer for a tie up. Naidu also indicated that Telangana Rashtra Samiti chief K Chandrasekhar Rao poured cold water on his plans to emerge as a potent force in south India by aligning the TDP and TRS.

The TDP tied up with Congress only after Telangana Rashtra Samiti chief K Chandrasekhar Rao spurned his offer for a tie-up, he said.
“I proposed (to KCR) that we two should unite. Congress will be restricted to Karnataka. BJP and Congress have no place in Tamil Nadu. The two Telugu states will have the upper hand in south India if TDP and the TRS joined hands.He told me he will think it over and a week later turned down my offer,” Naidu said.

He was addressing a meeting of the Telugu Desam Parliamentary Party here this evening. A release from the TDP later gave a gist of what Naidu spoke to his party MPs. The Andhra Pradesh Chief Minister said political alliances were dictated by democratic compulsions. “We had no other option except to align with non-BJP forces as the BJP was working against us. We have to fight the injustice the Centre meted out to the state and we need support at the national level for this. Hence, we decided to go with like-minded parties,” he was quoted as saying.

Rao wanted that the TDP contest the elections in Telangana and opposed any alliance with the Congress, he said. “By then I realized he (KCR) fell into someone elses hands,” Naidu said, apparently an indirect reference to Prime Minister Narendra Modi. It was only due to historic reasons that TDP allied with parties that came forward in Telangana, he claimed, referring to the ‘Maha Kutami’ (grand alliance) of TDP-Congress-CPI and Telangana Jana Samiti. He also said that the BJP unilaterally broke its alliance with the TDP in Telangana.