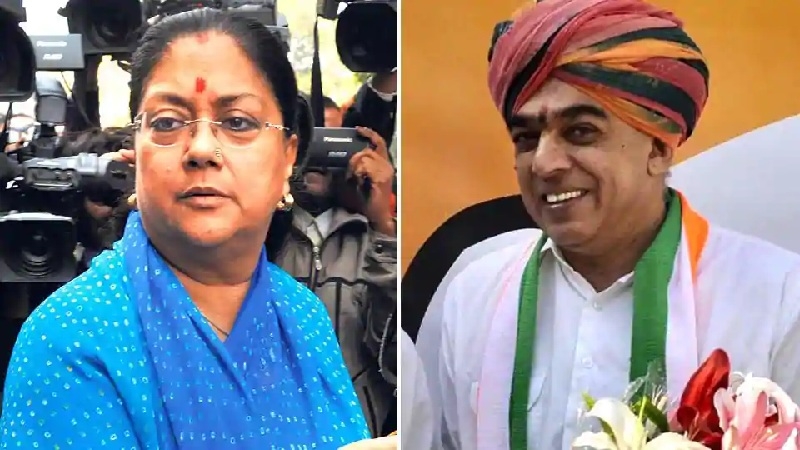 Jhalrapatan (Rajasthan): The Jhalawar district of Rajasthan, that for over several centuries have been selling its opium in India and China, is witnessing a grand battle between the Chief Minister Vasundhara Raje and the Congress’ new entrant Manvendra Singh. Large number of coloured turban and dhoti draped supporters of Manvendra Singh have come from Jodhpur and the border districts of Jaisalmer and Barmer to canvass from him.

For both Manvendra Singh and his supporters Jhalawar remains a mystery land. The opium of Jhalawar is largely consumed by the people of the two border districts and also Jodhpur. In western Rajasthan offering opium is a ritual which are followed during weddings and even mourning. “We have never seen how the opium is grown and this election has given us a chance to go to the countryside and see the poppy fields. It looks so beutiful with green all over and for us it’s a treat to watch as we have come from the desert,” said Narpat Singh, a supporter of Manvendra singh.

Manvendra Singh, the son of the ailing former Union minister Jaswant Singh, says he is fighting the election as an issue that has something to do with swabhiman (pride). He is trying to impress upon the people who travelled all the way from the arid Barmer to the greenfield of Jhalawar for regaining the lost pride as it was Vasundhara Raje, who denied ticket to Jaswant Singh in the 2014 Lok Sabha election.

Raje, who has been contesting the election for both Lok Sabha and Vidhan Sabha from Jhalawar never found the going as tough as this time. In the 2003 Lok Sabha election the Congress surprised her by fielding the mother of Sachin Pilot, Rama Pilot from Jhalawar. Rama Pilot gave her fright and mustered good number of votes but could not win.

“There is sympathy for Manvendra Singh, but people cannot forget the good work done by Vasundhara who nursed her constituency so well and after becoming the Chief minister she developed Jhalawar district like never before. There is no anti-incumbency factor here and people would vote for Vasundhara as they are indebted not only to her but also her son Dushyant Singh, who is the member of lok sabha from here,” said Raghunath Singh Jhala, a college teacher.

Jhalawar borders the erstwhile frontiers of the Gwalior state, and often the Gwalior soldiers would raid the area for looting opium. But the Madhya Pradesh Chief Minister Shiv Raj Singh, who belongs to the Kirar community and has sizeable number of people of his community in the Jhalawar district did come and campaigned in two Assembly segments of Jhalawar.

Manvendra Singh has high hopes from the Rajput voters as their number is 18,000, but he is also aiming to muster the support of both the minority as well as the Scheduled Caste and Scheduled Tribes votes that are collectively 90,000 in an Assembly segment that has 2.73 lakh voters.