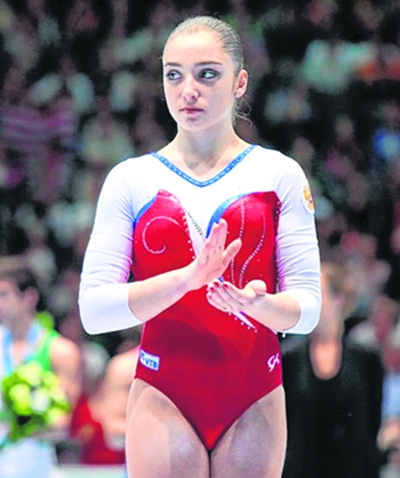 Kolkata : Elite sportsperson more often than not look for inspiration on their comeback trail from injuries and for Dipa Karmakar, it is Russian gymnast Aliya Mustafina, who won four medals at the 2012 London Olympics after being almost down and out with a career-threatening ACL tear.

Mustafina valor and tenacity as she had torn her Anterior Cruciate Ligament (ACL) with less than a year in the lead up to the London Olympics but ended up winning as many as four medals. “Look at Aliya Mustafina. She showed remarkable courage in winning a gold, a silver and two bronze medals in London. Who would have thought of that,” a confident Dipa told PTI during an interaction.

When everyone had started writing her off, Mustafina did not crumble and made a comeback at the 2011 Voronin Cup in December. The Russian went on to lead their contingent in all four events at the London qualifiers before bagging four medals at the Olympics. Much like Mustafina, Dipa also had torn the ACL during training earlier this year and went under the knife as the diminutive Agartala girl looks to achieve what she missed narrowly at Rio Olympics 2016.

“I’m absolutely normal, why should I think about what happened due to surgery. It’s does not matter to me anymore. It’s only about practice, practice and more practice,” the ‘Produnova Girl’ said. “I am doing my best to do better than previously. My coach (Bishweshwar Nandi) has chalked out my recovery path and I am continuing my rehab with my physio. I am following steps as was said by Dr Anant Joshi and the SAI has extended a great support,” said Asked whether the injury was a setback, she said: “I am mentally stronger now and want to achieve something. I don’t think it’s a pressure. I am a lucky sportsperson to have a coach like him who does not let any outside pressure affect me.”

Dipa would join the national camp at the Indira Gandhi Indoor Stadium in the capital next week after her coach Bishweshwar Nandi’s cousin’s wedding today. “My preparation has begun, I am slowly getting on to training, let’s see what happens next. I am following sir’s programme and I will go as per his (Nandi) direction,” the 24 -year-old said. Asked whether the preparation time for the Commonwealth Games in April next year is less, she said: “I got three months’ preparation time for Olympics as well as the World Championships. I don’t know what happens now.” Witty in her response to her comeback plan, Dipa said: “Even Simone Biles is yet to start competing (after her Rio performance).” Dipa was earlier felicitated by the Goenka College of Commerce and Business Administration.