After Lord’s, I worked on technical issues, says Kuldeep Yadav 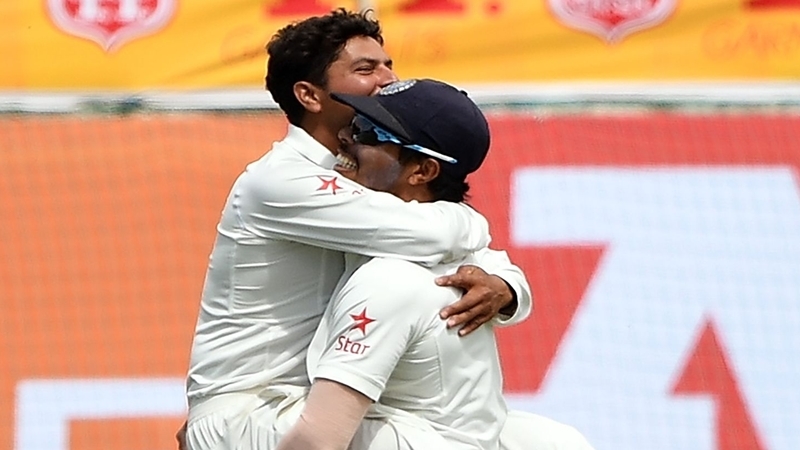 India's Kuldeep Yadav (L) celebrates the wicket of Australia's Glenn Maxwell with teammate Umesh Yadav during the fourth and last Test cricket match between India and Australia at The Himachal Pradesh Cricket Association Stadium in Dharamsala on March 25, 2017. / AFP PHOTO / PRAKASH SINGH / ----IMAGE RESTRICTED TO EDITORIAL USE - STRICTLY NO COMMERCIAL USE----- / GETTYOUT |

Rajkot: Kuldeep Yadav says his maiden five-wicket haul in Test cricket was a result of going back to the drawing board in his bid to improve as a red-ball bowler after being dropped from the Indian team during the England series. Kuldeep bowled only once during the five Test series in England, going wicket-less at Lord’s before being ignored for the final two Tests.

Constantly switching between formats, Kuldeep came back home and bowled long red-ball spells under the watchful eyes of his personal coach before the two-match home ‘A’ series against Australia. Next up was Asia Cup, a white-ball competition.  “It is very difficult to switch to red ball from white ball and vice versa, especially for a wrist spinner. It is challenging because you take time to get used to it. White ball is on the harder side, grips better. Red ball wears down faster, gets soft,” Kuldeep said after becoming the first Indian chinaman to pick five wickets.

“After coming back from England, I went to my coach at home, bowled with the red ball for three four days . It was difficult because after playing white ball format you lose rhythm with the red ball. I mainly focused on release of red ball, bowling slower as you tend to bowl faster with white-ball.” The extra practice helped as he picked up eight wickets against Australia ‘A’ in the second unofficial Test.
He did not get many opportunities in England but when asked what went wrong at the Lord’s, where he wicket-less in nine overs, he said: “In England I was thinking bowling good length but that time I was not much used to the Duke ball. The Duke red ball is harder than the SG so you need probably 10-15 days to get used to the ball.”

The 23-year-old could not get into the groove in the first innings but bowled much better in the second. “First innings I did not anticipate that they (West Indies batsmen) will attack me so much. But they were going for their strokes so in the second innings I did not fight the ball as much, kept it tight and got the wickets. “They have a lot of power hitters and if you give them too much flight, you could end up leaking runs.”