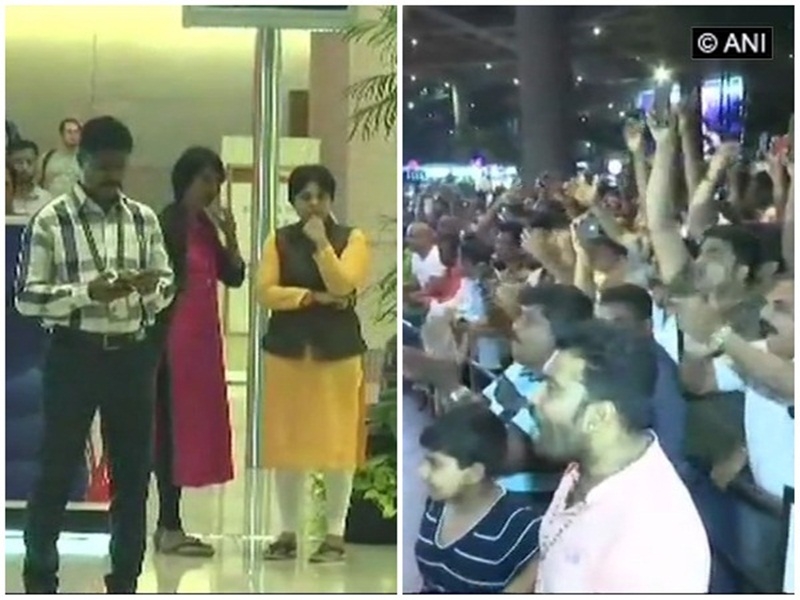 Mumbai: Agitated protesters gathered outside the Mumbai airport where Pune-based activist Trupti Desai arrived after she called off her plan to visit the Lord Ayyappa temple at Sabarimala over concerns of law and order in Kerala.

Founder of the Bhumata Brigade, Desai is presently stuck inside the airport as devotees of Lord Ayyappa are staging a protest outside, demanding the activist to drop her plan to visit the holy hill shrine till she attains the age of 50 years. “We have come here to protest. Trupti Desai should try going there after attaining 50 years of age and not before that. She won’t be allowed to step inside the temple before that. There are so many devotees working towards this and stopping other women too,” an agitated protester told ANI.

Although the seven-member group led by Desai arrived at the Cochin International airport on Friday early morning, the protesters did not allow her to proceed to Sabarimala Temple. The team had to wait for the entire day inside the airport as no cab driver agreed to take her team to their destination – Sabarimala temple. In the wake of protests carried out against her visit at the Kochi airport, the activist said that Kerala police advised her to go back to Pune.

“The cab drivers and hotel owners were threatened by the protestors here that if they will provide us shelter, then they will face a law and order situation. It is sad that the devotees of Lord Ayyappa are abusing and threatening us,” Desai told reporters. As the Temple reopened yesterday for a two-month long pilgrimage season, Section 144 of Criminal Procedure Code (CrPC) was imposed in Nilakkal, Pamba, and Sannidhanman as a precautionary measure. The social activist had, on November 14, written a letter to Kerala Chief Minister Pinarayi Vijayan, stating that she would not leave the state if she was not allowed to enter the holy hill shrine.

The Sabarimala temple and surrounding areas witnessed a string of protests recently over the Supreme Court’s decision to quash restrictions on the entry of females aged between 10 and 50 years into the shrine. This is the third time that the Temple has opened after the Supreme Court lifted restrictions on the entry of women into the temple. So far 3,505 protestors have been arrested and around 529 cases were registered in connection with a series of incidents of violence in the state after the opening of temple gates in October.