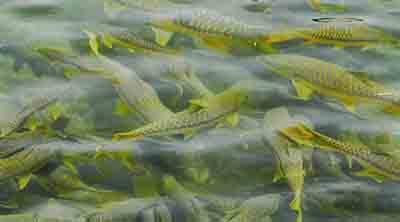 Mumbai : Loss of breeding ground due to pollution has become the main reason for the extinction of Mahseer, a fish that can grow to about 9 feet in size, or 54 kgs in weight.

Due to loss of habitat, this species of fish is on the verge of extinction. Therefore, Tata Power company has facilitated their conservation through ecological improvement of lakes for food and sport for breeding.

The company has set up a breeding center at Lonavala and have bred over several lakhs of Mahseer fingerlings.

Vivek Vishwasrao, Head, Biodiversity, Tata Power said, “The hatchery here in Lonavala breeds over 3 to 4 lakhs of fingerlings every year. We feed them groundnut cake and rice bran. Unfortunately, this fish is becoming extinct since it is not receiving fresh water lakes for breeding.”

Mahseer is also known as the toughest sport fish and fighting prowess of the fish has made it popular among recreational angling enthusiasts. “Poaching, unmonitored angling and river construction projects have also caused their extinction,” added Vishwasrao.

It’s survival is important to conserve the eco-system. “Their health is linked to the health of India’s biggest rivers which includes river Ganga,” said Vishwasrao.

According to scientists at Tata Power, around 13 million fertilised eggs have been obtained and seven million fingerlings of Mahseer have been produced for stocking the water bodies in India.  Around 300 Fishery Scientists have also been trained to carry out the conservation activities of this fish.

The species of this fish are found in the River Ganga and Yamuna too. Tata Power has supplied Mahseer fingerlings to various states in India namely Maharashtra, Karnataka, Punjab, Rajasthan, Andhra Pradesh, Haryana and Assam.

According to scientists, a clean river would be helpful for the  ‘Act for Mahseer’ initiative taken up by Tata Power since toxic and polluted water are the main reasons for the depleting number of this fish.