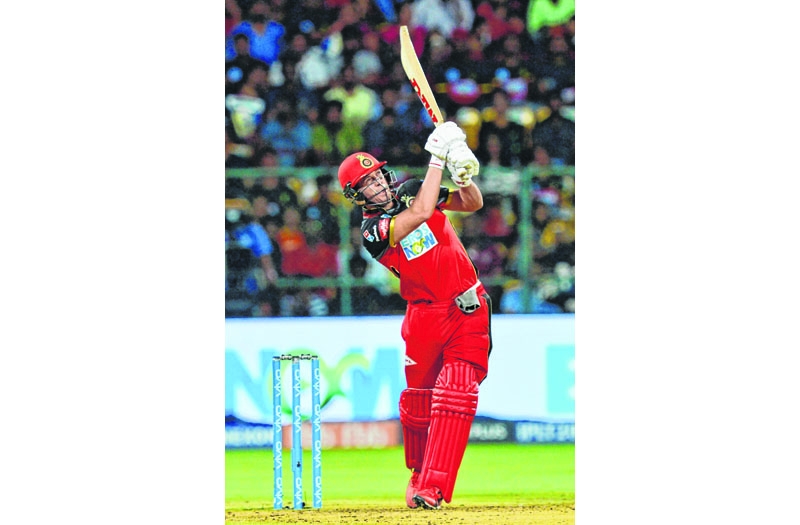 With the win, RCB kept their play-offs hopes alive.

Chasing a huge 219, SRH lost their first wicket in the form of opener Shikhar Dhawan (18) on 47. Next batsman Williamson shared a 135-run partnership with Manish Pandey who scored an unbeaten 62 runs off 38 balls which included seven fours and two sixes.

Williamson struck seven fours and five sixes during his innings. With 20 runs required from the last over, Williamson lost his wicket on the very first ball, giving an easy catch to Colin Grandhomme at the deep fine leg off Mohammed Siraj. Hyderabad could manage to reach 204 for three in their 20 overs.

Earlier, AB de Villiers and Moeen Ali smashed quick-fire half-centuries to propel RCB to an imposing 218 for six in a must-win match.

Afghanistan’s leg-spinner Rashid Khan once again shone bright with the ball for Sunrisers with figures of 3-27 from his four over.

But Sunrisers were off to a great start as they reduced RCB to 38 for two inside five overs after opting to field.

Sandeep Sharma (1-40) struck the first blow with the last ball of the opening over, removing Parthiv Patel caught by Siddharth Kaul at third man boundary.

De Villiers then got into the act for RCB, hitting some exquisite boundaries off Shakib Al Hasan and Sandeep before Rashid cleaned up skipper Virat Kohli (12) with a googly in the fifth over.

Brought into the attack in the eighth over, Basil Thampi leaked runs as Ali smashed consecutive sixes off the pacer — first over mid-off and then over square-leg boundary — to give momentum to RCB’s innings.

De Villiers brought up his fifty off 32 balls with two consecutive boundaries off Kaul (2/44) in the 12th over and then Ali followed suit notching up his maiden IPL half-century with a four of Thampi in the next over.

The duo went hammer and tongs as an otherwise tidy Sunrisers bowling attack looked clueless in front of the onslaught. But just when it seemed the duo would run away with their power-hitting, Rashid struck twin blows in the 15th over removing both the set batsmen.

De Villiers perished in search of a big shot caught by Shikhar Dhawan at deep square leg while Ali reverse-paddled a delivery to Sreevats Goswami behind the stumps a ball later. Ali’s innings was laced with two boundaries and six hits over the fence.