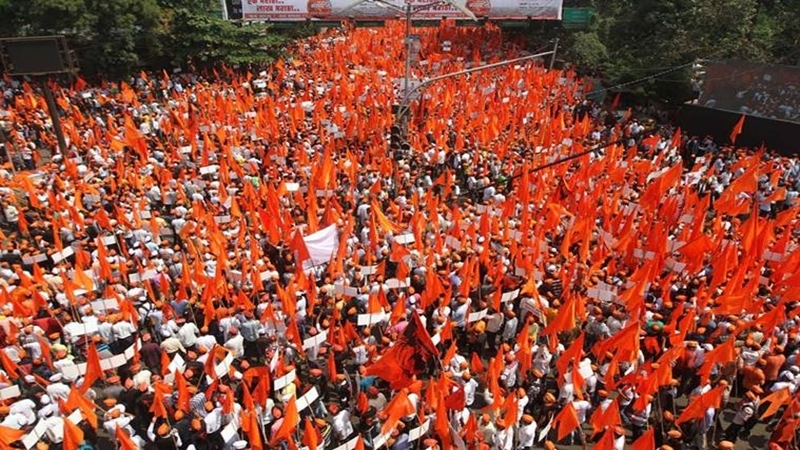 After organising around 57 silent rallies across Maharashtra since 2016, the Maratha community has taken out its biggest-ever protest rally in Mumbai on Wednesday, August 9, 2017. The rally has started from Jijamata Udyan in Byculla at 11 am and will conclude at Azad Maidan near Chhatrapati Shivaji Maharaj Terminus by 5 pm. Lakhs of people are coming to join the morcha and thousands of vehicles have already arrived in Mumbai from different parts of the country. In order to ensure a smooth traffic flow, the traffic police have diverted and closed some of the routes. The use of drones, CCTVs, technical surveillance and 7,000 police personnel have been assigned to avoid traffic chaos and ensure that the protest doesn’t lead to any law and order problem.

How it all started?
The silent rallies that started on August 9, 2016, till date has organised 57 rallies in every state and even for its 58th, the participants will follow the same pattern – silent march, no speeches, no slogans and no banners (only official logo). The rallies were started as a response to the Kopardi gang-rape murder of a 14-year-old Maratha girl in Kopardi, Ahmednagar district in July 2016. The demand was to award death penalty to the culprits. Soon the marchers took to other causes that include Maratha quotas in state-run educational institutions and government jobs, amendments to the Scheduled Castes and Scheduled Tribes (Prevention of Atrocities) Act, guaranteed rates for farm produce and also loan waivers for farmers to curb suicides. The dominant caste makes about 20 percent of the population in Maharashtra.