5 Nagas and their prominent roles in Hindu mythology Snake worship is a tradition being followed in India since ages and is present in several ancient cultures, where snakes are portrayed as an entity of strength. Due to snakes’ nature of casting its skin, it represents rebirth, death and mortality. Several Hindu temples houses snake idols and images carved on rocks. These idols and images are worshipped with flowers, diyas, milk and incense sticks to gain wealth, fame and knowledge. Several Hindu gods and snakes are associated closely like Lord Shiva is depicted wearing a snake around his neck and Vishnu is seen performing yoga nidra on Shesha Nag. Here’s a look at five Nagas and their prominent roles in Hindu mythology.

Astika
Astika was the son of Jaratkaru and serpent goddess Manasa. According to Mahabharata, Astika saved the life of a serpent Takshaka, the king of snakes, during the Sarpa Satra. The snake sacrifice was organised to avenge the death of his father Parikshit due to snake bite of Takshaka. Astika convinced the king to end the victimisation of the serpent race. The day is said to be Shukla Paksha Panchami in the Hindu month of Shravan and since then the day is celebrated as Nag Panchami. Adishesha
Adishesha also called as Sheshanaga is the king of nagas. Puranas mention Adishesha as the one who holds all planets and universe on his hoods and sings glories of Lord Vishnu. He is often depicted resting on Shesha. It is said that Shesha supports Kurma and when Kurma moved, Shesha yawned and the gaping of its jaws caused earthquakes. Shesha in Sanskrit implies ‘remainder’ – meaning when the world is destroyed at the end of Kalpa, Shesha remains as he is. As per Mahabharata, Shesha was born to sage Kashyap and his wife Kadru. Kadru gave birth to thousand snakes of which Shesha was the eldest. Vasuki
The snake that we see around the neck of Lord Shiva is Vasuki. It is believed that Shiva blessed Vasuki and wore him as an ornament. He is considered as the king of nagas and has a gem called Nagamani on his head. He is also mentioned in Ramayana and Mahabharata. The popular legend in Hinduism in which Vasuki is a part was the ‘Samudra Manthan’, the churning of the ocean of milk. In the legend, devas and Rakshasas were engaged in the churning of the sea in search of nectar to be immortal. Vasuki allowed the devas and rakshasas to use him as a rope to extract the ambrosia of immortality. Kaliya
Kaliya was a poisonous snake living in the Yamuna river in Vrindavan. The water boiled and bubbled with poison for four leagues and no human or birds could go near the river. Kaliya was the resident of Ramanaka Dwipa but moved to Vrindavan by the fear of Garuda, the enemy of serpents. Garuda was cursed by a yogi he could not enter Vrindavan. Once when Krishna with his friends were playing on the banks of the river and accidentally the ball fell in the river. Krishna jumped in the river and Kaliya rose up with his hundred and ten hoods vomiting poison. After a tiff with the snake, Krishna rose up from the bottom dancing on the head of Kaliya. The incident is remembered as the ‘Kalinga Nartana’ in South India. 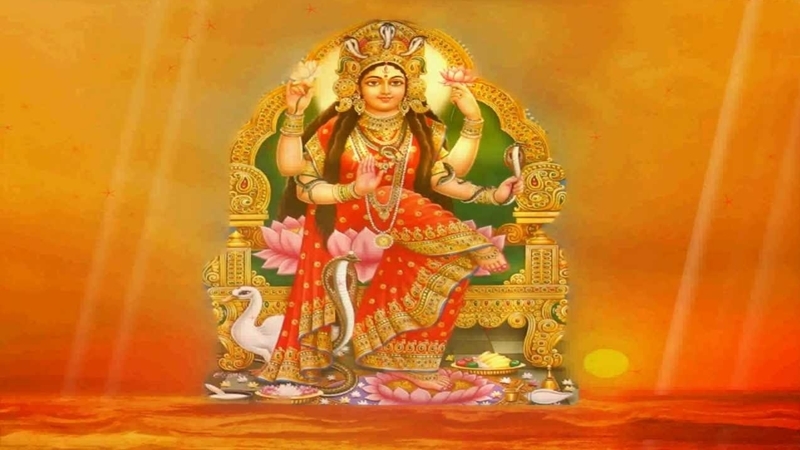 Manasa Devi
Mansa Devi is a Hindu goddess of snakes worshipped mainly for the prevention and cure of snakebite and for fertility and prosperity. She is the sister of Vasuki and wife of sage Jaratkaru. She is depicted as a goddess sitting on a lotus, covered with or standing upon snakes. Sometimes she is also seen with a child on her lap.