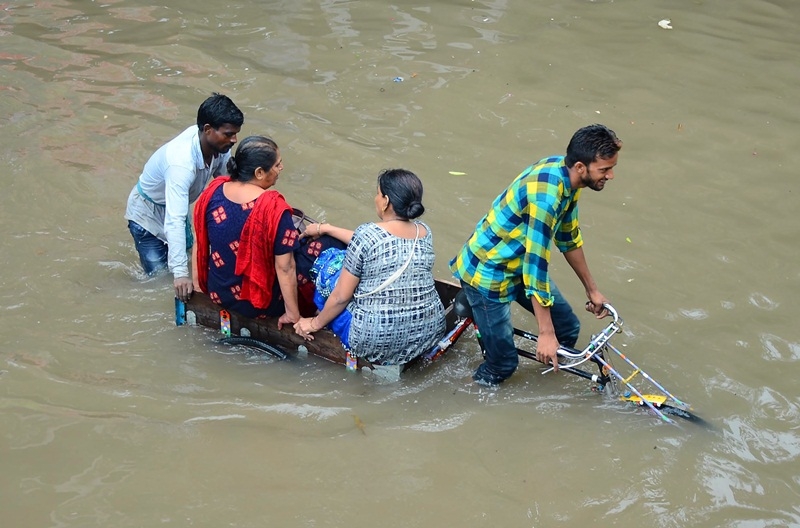 Indian women are transported on a bicycle cart on a flooded road following heavy rain in Mathura in Uttar Pradesh state on July 26, 2018. / AFP PHOTO / - |

Lucknow: At least 37 people have been killed in rain-related incidents in Uttar Pradesh in the past 48-hours since Thursday, an official said on Saturday. Rains have continued to batter many parts of the state for the third consecutive day on Saturday, the Met said.

District authorities have been asked to brace for any eventuality as the Met predicted more rains in the coming days. According to the State Disaster Management Authority, six persons have been killed in Agra, three each in Muzaffarnagar and Kasganj, four each in Meerut and Mainpuri, two in Bareily and one each in Kanpur rural, Mathura, Ghaziabad, Hapur, Rae Bareli, Jalaun, Jaunpur, Pratapgarh, Bulandshahr, Firozabad and Amethi. Four deaths were reported late on Friday from Saharanpur amid rescue and relief operations.

Over two dozen people have been injured in the incidents like house collapses, wall cave-ins, lightning and storm. Ten cattle deaths were also reported from Kanpur rural, Muzaffarnagar, Lalitpur and Pratapgarh. Heavy rains continued to pound major regions in the state, triggering swelling of many rivers. It has been raining overnight in the state capital where Prime Minister Narendra Modi is scheduled to arrive later on Saturday.

The city has been turned into an island of sorts with waterlogging in most parts of the city. Power outages have been reported from Hariharnagar, Indiranagar, Gomtinagar, Sapru Marg, Aliganj, Sitapur road and Aminabad due to bursting of cables and transformers. Chief Minister Yogi Adityanath has announced an ex gratia of Rs 4 lakh each to the family of those killed.